If you haven’t read posts 1 and 2 of the Route 66 saga, the backdrop is that I’ve ridden from Chicago, IL, to a small town in Texas called Shamrock, on a rented Harley Davidson. Here we rejoin our story.

If you look in any Route 66 guide under the entry for Shamrock, the headline location is always the U-drop Inn and Tower Cafe. Built in 1936 along the then bustling Route 66, it is now the local information centre and memorabilia store (run by some of the nicest people you could wish to meet). This was my first port of call to get the lie of the land.


Armed with avuncular advice on where to stay and where to dine (probably too posh a word to describe my eating experience) that evening, I checked into the Shamrock Country Motel.
The following clip describes the way this particular Friday evening unfolded.

Wearing my Uruguay Golf Club shirt and my smartest shorts, I biked over to the course in the morning to check things out. No sooner had I arrived than Mike, the friendly manager, came flying round the corner in a tuned-up golf buggy and introduced himself. He was a cheerful, slightly rotund man with his knee in a heavy-duty brace. We proceeded to exchange golf stories until, after telling him how wonderful the courses in Vietnam were, he revealed that he was a Vietnam war veteran. Awkward silence.

“So, lovely weather this morning, eh?”

He returned to his jovial self, set me up with a buggy and some rental clubs and warned me to keep an eye out for rattlesnakes and raced away in his V8 golf cart.


Aside from hitting a house and also killing fish in the lake with my wayward shots, I enjoyed my round. I then said goodbye to Mike and hit the road. An old university friend now living in Austin, TX, had texted me to encourage me to try the eating challenge at The Big Texan Steak Ranch, a few miles East of Amarillo. Determined to stop somewhere and ask, “Is this the way to Amarillo?”, This seemed as good an option as any, so I stopped there for lunch.

The place was vast, the walls hung with hunting trophies and old rifles and an old Texan troubadour in a stetson walked between the tables playing country music to the customers as they ate. I took one look at the eating challenge and decided that avoiding it, although it would be a “missed steak”, would not be a “mistake” – it consisted of eating a 70oz steak in an hour with accompanying side dishes. To put that into context, it’s like having 2 litres of water in your stomach but only if the water were pure meat! Pictured below is my more modest 16oz steak – less than a quarter of the size of the challenge steak.


A satisfied customer, I ride out once more. I managed to reach Amarillo before the food coma kick in, so I decided to stay for the night.

Just to the west of Amarillo lies the Cadillac Ranch where, very artistically, someone has flipped a number of cars vertically and buried the front end so they remain upright. The similar sculpture at Henry’s Ra66it Ranch in Illinois was an homage to this original piece. Why they did it or what the inspiration was, I do not know. I do know I loved it. 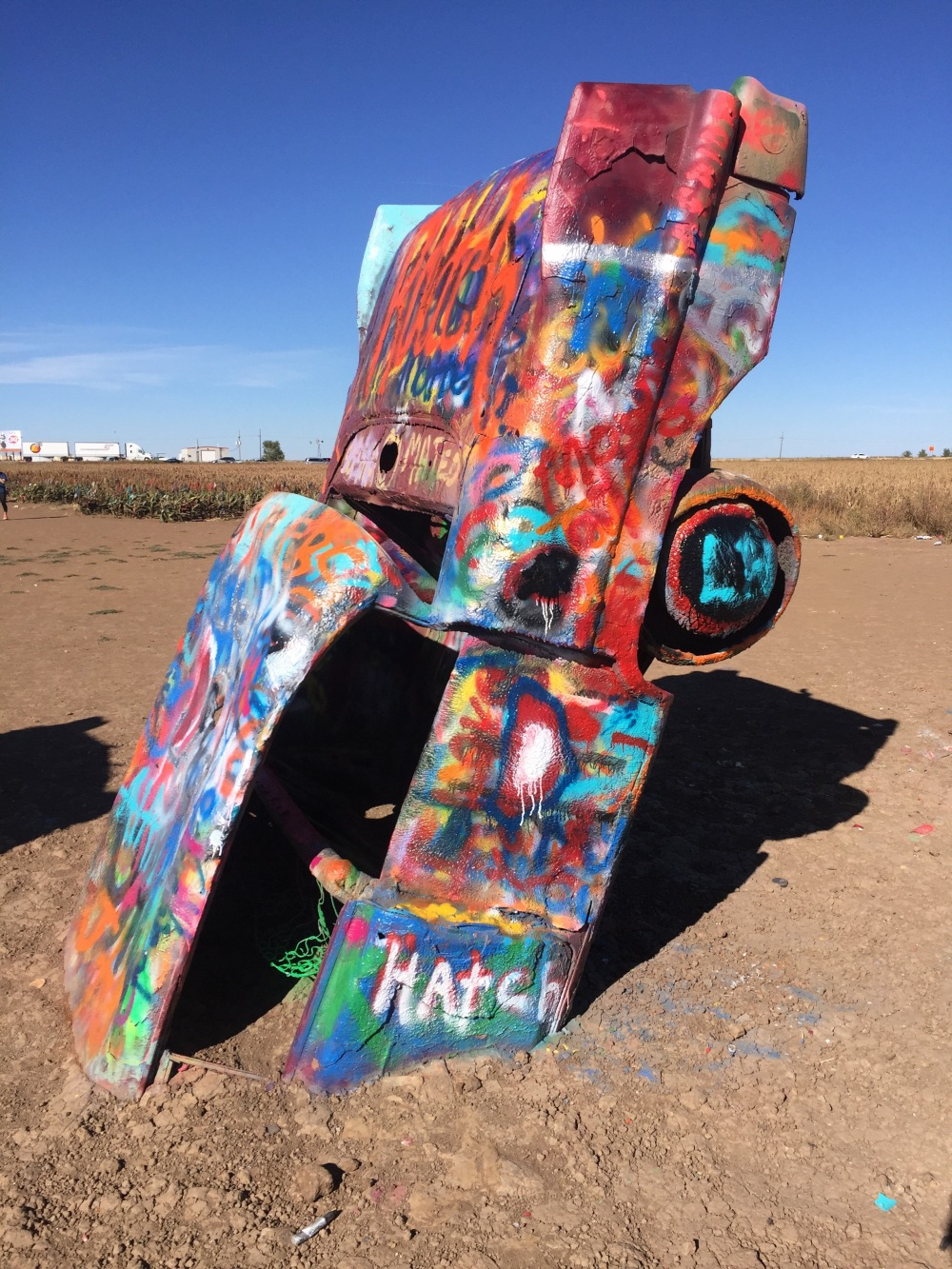