After our wonderful but physically demanding adventures in Masaka and Queen Elizabeth National Park, a day or two of doing sitting on a beach and doing very little seemed very appealing. Taking advantage of our East African Tourist Visas, my Argentinean friend Mauro and I had booked flights to Nairobi, the Kenyan capital, from where we planned to board the Madaraka Express, a new, Chinese-built train connecting Nairobi with Kenya’s busiest port – Mombasa.

Despite flying on the smallest plane I’ve ever boarded that I wasn’t planning to parachute from, the journey to Nairobi passed smoothly and without incident, as did a night in a hotel near the airport on arrival so, the following day, Mauro and I set off for the Nairobi SGR Terminus, home of the Madaraka express. On arrival, though the place was deserted (we were some 3 hours early to try to secure tickets), security was tight. Al shabab attacks in recent months had left the city on high alert. We left our luggage in a holding area outside the compound and, after a x-ray of our backpacks and a full body scan, we were allowed into the ticket office.

Our details had to be input for the ticket to be valid. My friend, Buenos Aires, of nationality American, had to point out to the friendly sales assistant that she was mis-reading his passport but, this slight hitch aside, all went well. Our luggage was then subjected to sniffer dogs and several more scans and identity checks were carried out before we were finally ready to board the train.

Five hours on a train can seem like an eternity, and there is only so long that you can spend staring out of the window on the lookout for giraffes, so it was a great relief that the two young Kenyans sitting opposite us turned out not only to be good conversationalists, but also happy to learn the rules of a new card game. Time flew past in the carriage; scenery flew past outside.

We exchanged numbers at the Mombasa terminal, agreeing to meet for a drink later that evening, and Mauro and I climbed into a taxi and headed to our Airbnb. Arriving as dusk fell, we drove along a shadowy cul-de-sac until we reached a large iron gate. A quick phone-call later and the gate swung open.

We were led along a sandy path past goats, geese, a tortoise, a peacock and some ducks to a palatial, 3-bedroom house. We dropped our bags, showered and headed back out. I shall gloss over the evening, although will mention that it started with a civilised beer with our new Kenyan friends and ended with tequila shots. I am ashamed.

The morning sunlight allowed us to examine our lodgings in greater detail. The walled area contained another two concrete buildings and, perched on tall, wooden stilts, a thatched beach cabin that overlooked the beach. A small gate in the high walls led to the beach itself. The whole place gave off an air of shabby chic – a kind of crumbling, forgotten finery.

Feeling relaxed and re-energised, a couple of days later we returned to Nairobi. Sadly, our carriage companions were less engaging and we felt every minute of the 5-hour return on the train.

Distraught that he had only caught glimpses of lions in Uganda, Mauro suggested we book onto an early-morning safari tour in the Nairobi National Park, a sprawling 117 km2 of protected land a mere 7km from the centre of the city. Setting off in a 4×4 at dawn, we entered the park as the sun hung low over the cityscape in the East, a strange contrast to the loping, scurrying and soaring of the creatures in the foreground. Again, this part is best told in pictures, not words. Suffice it to say that both Mauro and I were glad of our decision to vacate our beds at silly o’clock. 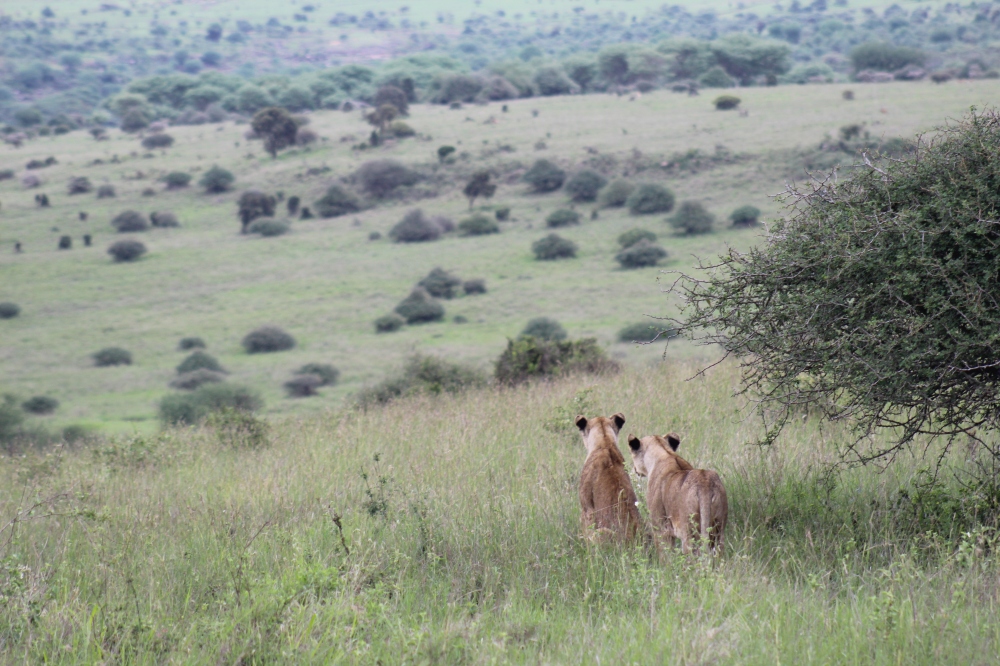 I have now spent too long procrastinating and avoiding the pressing issue of finishing the book that I am writing. That is the reason for the brevity of this post and the reason I shan’t write a neat conclusion. It was fun. Goodbye for now.