Having ridden motorbikes for over 10 years, riding Route 66 had long been a dream of mine. For those who are not familiar with Route 66, it was the first major road connecting the East and West coasts of America, running from Chicago to Los Angeles.

And if you’re ticking off a bucket-list item, you may as well do it properly, right? So I hired an enormous Harley Davidson from Eagle Rider, a nationwide motorcycle dealership network, and prepared to do it in style.

I arranged my belongings in the panniers and top-box then turned the key. As the huge engine thundered into life, shaking the very fabric of existence around it, a childlike grin of pure delight spread across my face. I was in my happy place. And my happy place was mobile.

The official start of the route is in downtown Chicago, however, having just come from there through thick traffic to collect the bike, I felt happy to rejoin it a few miles South West of the city.

Route 66 has long since been replaced by the interstate as the main artery for cross-county travel and, as a result, parts of it are in a state of disrepair and other sections have disappeared entirely so, at times one has the very asphalt of the mother road beneath one and, at others, one has to be content with following the old route on new roads.

Day one was gloriously sunny, punctuated with stops at old filling stations and diners as Hailey the Harley and I made our way southward through Illinois.

One thing that was immediately obvious was how badly towns and businesses on Route 66 has suffered from the advent of the Interstate. Where previously the road had run right through the heart of these towns, now it bypassed them, leaving behind dilapidated buildings and sometimes complete ghost towns, hinting at their former glory from behind flaking paint or crumbling brickwork.

This effect produced a kind of sad charm, a nostalgia that I, as an outsider, had no real right to feel. But which I felt keenly, nonetheless.

After fueling myself with the meatloaf pictured above, I fed the bike with a soupçon of petrol à la Shell and continued to Pontiac for a spot of museum-time. 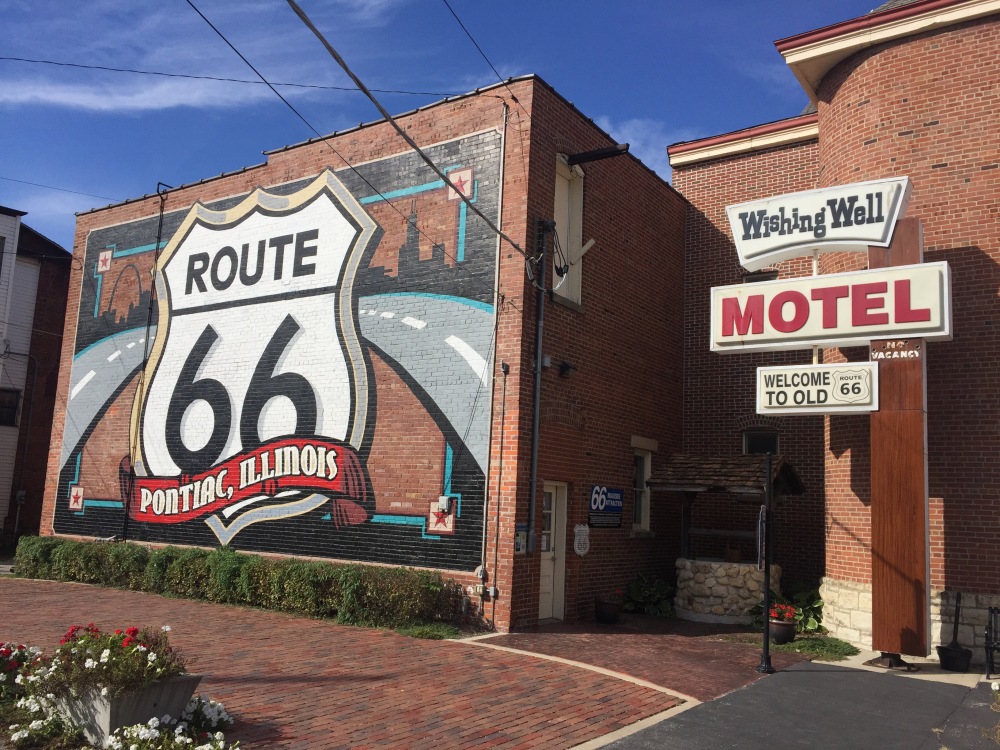 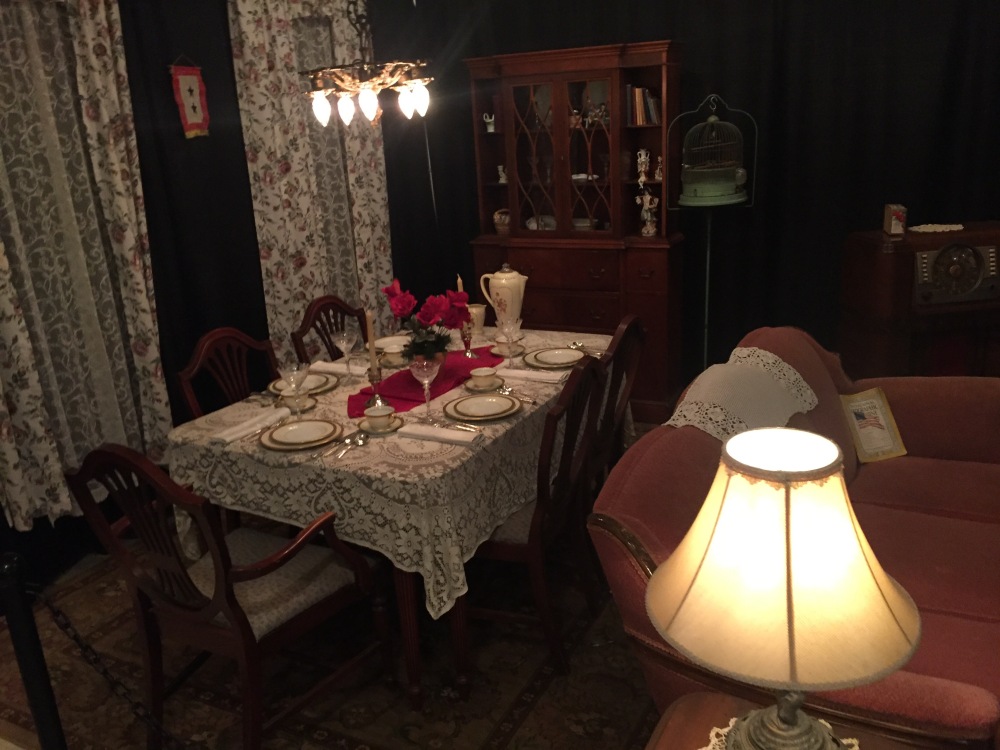 I stayed overnight a few miles further south in Springfield, Illinois, taking advantage of a free shuttle service to check out a local craft brew bar for dinner.

Gentle sunbeams roused me from slumber with quiet promises of a sun-kissed day ahead. I meandered onwards, my centripetal continuity only broken by the occasional photo opportunity.

Internet research had suggested I should visit Henry’s Ra66it Ranch in Staunton, IL (see what he’s done there? Very clever!). I knew little about what to expect. I rolled up to what looked like an old filling station with trucks and cars adorning the lawn. Some large rabbits were hoping happily in hutches beside the main building. 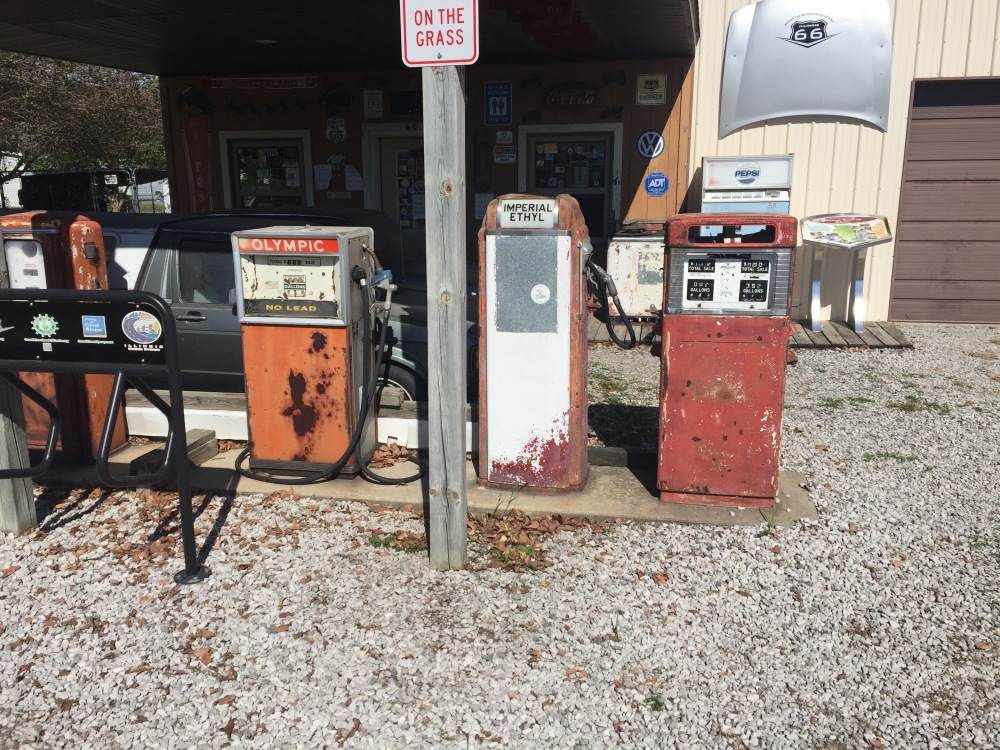 I entered what turned out to be a shop filled with memorabilia, Route 66 Americana and more rabbits, and was greeted cheerily by a gentleman who introduced himself as Rich Henry. I had had the good fortune, it seemed, to coincide with the owner. But, as we chatted, I realised it was not simple good luck. Mr. Henry, wonderful man that he is, feels so bad at the idea that visitors may show up and he not be there to greet them that he almost never takes time out. And he does it all as a labour of love.

Rich, it turns out, had a very interesting background. A champion drag racer, truck driver, rabbit enthusiast and collector. He had rebuilt the building, created a sculpture using the rear halves of old Cadillacs on the lawn and even installed a massive, plastic rabbit/ra66it!

With a genuine sense of gratitude and respect, I bid farewell to Rich and kicked the iron horse into a canter.

I had planned to meet Boyd Whittall, a friend I’d made in Namibia, for lunch in St. Louis, just over the state border in Missouri (pronounced “Missoura” by the natives, for some reason). This meant riding through Madison County. Now, although I’ve never seen the Robert Redford and Goldie Hawn movie, I was aware that it had bridges in it. I didn’t get photos of all of them, but the shot of the Chain of Rocks bridge below is representative: they’re beautiful.

At midday, the iconic St. Louis arch rose from the horizon. I was too busy with navigation to take a photo so you’ll have to use your imaginations. Or Google. It’s arch-shaped.

In the knowledge that I was now a hardass Harley rider, Boyd suggested we meet at Shady Jack’s Saloon, a biker cafe a mile from downtown. It was all you could wish for from a biker bar but a sign prohibiting photos inside was not to be ignored, particularly when Boyd told me there had been a recent shooting in the bar. Some pics outside will have to do.


I rode on through the afternoon, stopping briefly for a coffee and to see the frescos in Cuba, MO before stopping for the night in Springfield. Nope, I didn’t get really lost, there’s one in Missouri too.