Back on the road again! I am collected from Rivendell hostel and taken to the meeting point in Windhoek to commence my 7-day tour ofnorthern Namibia.
I found a similarly convivial crowd to the last tour, mostly slightly older (a 22-year old German girl, a mid-thirties Kenyan girl and I were the the only three in a party of 14 below 40) but all turned out to be, whilst very different characters, great company and good fun. In addition to us there was the usual trio of Canadians, the librarian from NY from my previous trip, a kiwi couple, three fellow Brits and a mother and daughter from Beijing.

Our first stop was at a local craft market with hundreds of open tents selling wood carvings of animals, bracelets, soap dishes and other such paraphernalia. Whilst some items were very beautiful, I was being aggressively sold to by each and every shopkeeper so I bought two items at “tourist price” and made good my escape.

Our first game drive was to be at the Africats reserve in Okonjima. Arriving at 4pm we had 90mins before sunset, so were quickly bundled into jeeps with a local guide and hurried out into the park. We had to make one stop at the lodges to pick up a member of our tour who had a slightly different itinerary and had been staying at Africats for a couple of days. From the second the gentleman appeared, his nationality was obvious : he wore a floppy, cream-coloured sun-hat, from under which protruded a sunburnt noseand he was carrying a battered and bruised, hard suitcase (which I was later to discover he had named his “Paddington case”. This man was as English as they come. This judgment proved 110% correct. He also turned out to have a wonderfully dry sense of humour.

Africats is a charitable organisation that specialises in rehabilitating (and reintroducing to the wild, where possible) injured and orphaned big cats. Whilst we saw some other wildlife en route, our first visit was to see Wahu, a orphaned leopard raised by a farmer until his hormone changes made him impossible to keep domesticated and he was taken on by the sanctuary.

We arrived at feeding time and, sleek and powerful, Wahu took centre-stage, tearing at his food with relish (not actual relish, the meat was unseasoned).

We needed to see the cheetahs before sundown and so left Wahu digesting and drove inwards, finding a trio on the fastest mammal on earth lounging in the shade of some bushes. As they had not yet been reintroduced to the wild, they seemed unfazed by our presence and continued the important, catly office of total laziness.

Our campsite for the evening was a clearing in the bush, yet kitted out with electricity and hot water, flushing toilets and a fire-pit. Whilst I have no photographic evidence of the experience, showering under the most perfect view of the Milky Way is a memory that will stay with me for quite some time. As will brushing my teeth in full sight of a porcupine!

We ate round the camp fire, admired the stars and regretted only the lack of marshmallows.

After a stint of driving to reach Etosha National Park the following day, we had our first game drive in a fully “wild” (although protected) environment.

The wildlife was prolific but the highlight of the drive was seeing two herds of elephants converge at a watering hole. These ponderous pachyderms really are the most impressive beasts. With bull elephants weighing up to 5 tonnes, they were pound-for-pound with our bus, so when a male headed our way to investigate, we maintained a respectful silence. 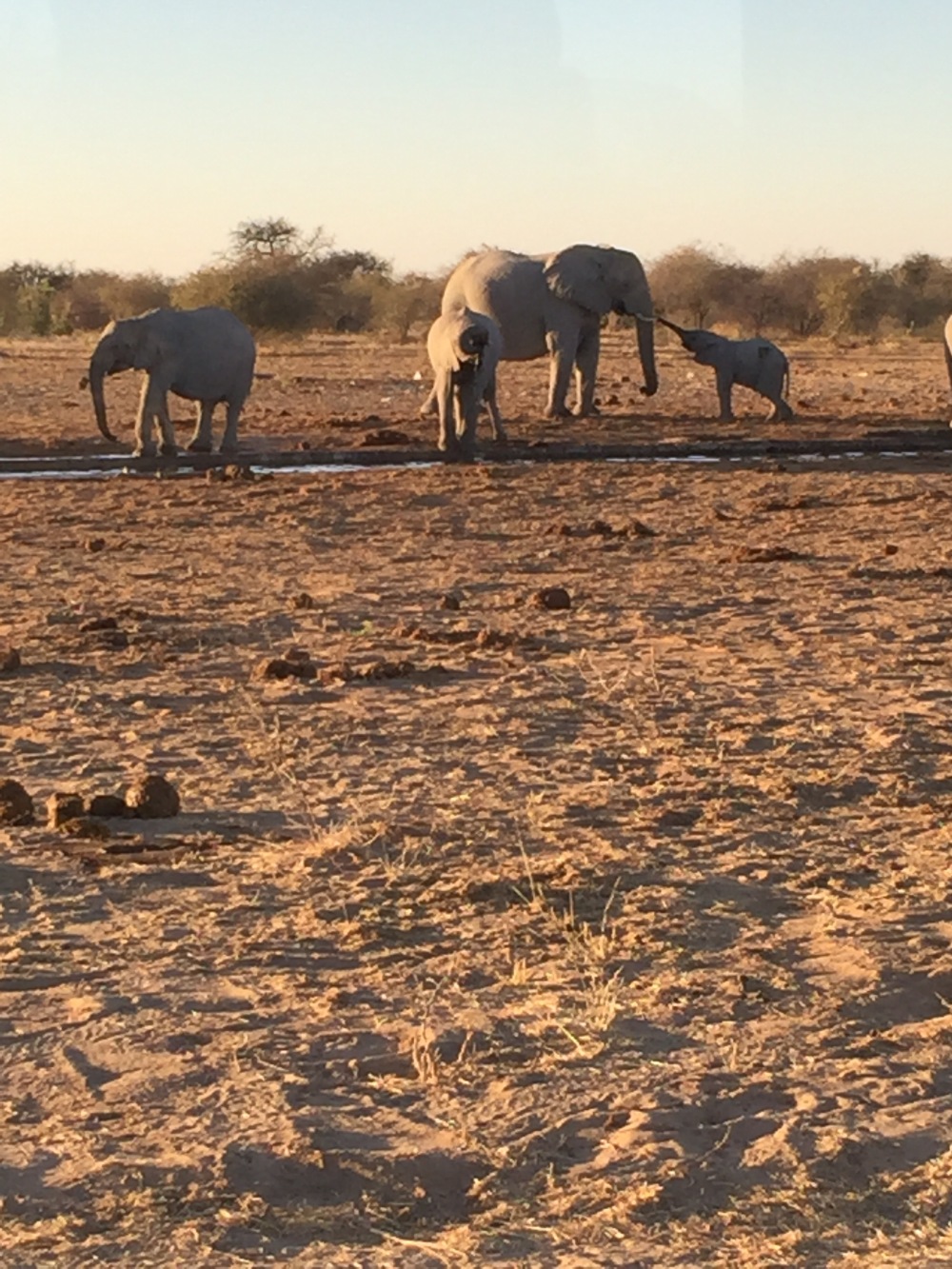 I shan’t attempt to describe the animals, their habits, the way they interact. Watch David Attenborough, he’s considerably better. Some photos below. 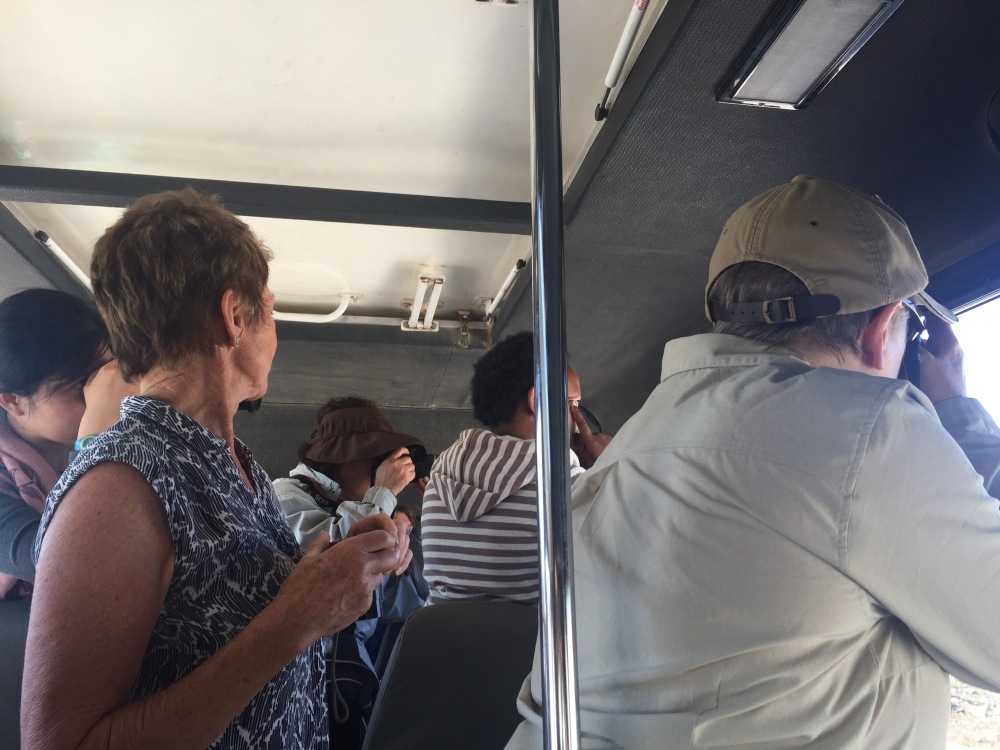 We were so exhausted from craning necks and being constantly alert that the whole group was asleep before 9pm that evening.

Game driving was the order if the day the following day and, although we had seen plenty of giraffes and elephant, we had failed to spot any rhino or lions. Eyes were peeled and away we went.

Amongst the zebras, springbok and gnus (I was delighted to find them having grown up listening to “The Gnu Song” by Flanders and Swan) we also saw:

But neither lions nor rhino.

Slightly disappointed, on finishing the drive and pitching camp at a new site in the park, we took advantage of the break before supper to head to the watering hole attached to the camp (no, not the bar!). Guess what? Not just one rhino, but four! 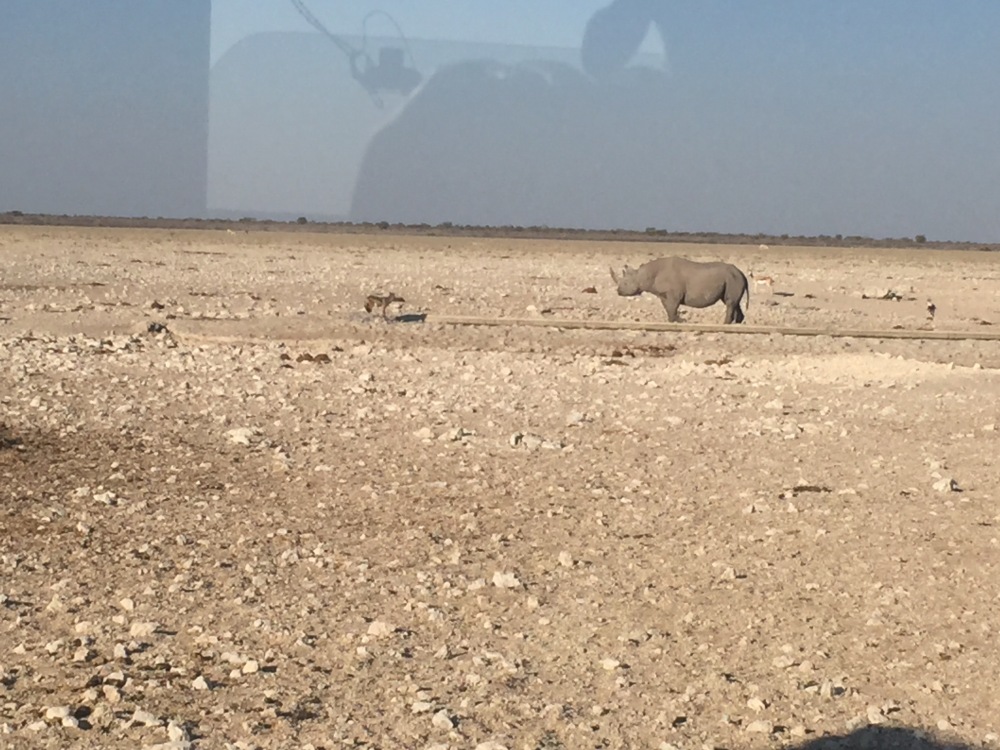 Either as flirtation our as a site of dominance, there was a lot of snorting and some mock charges in between drinking sessions at the water’s edge. Box ticked, very emphatically. Now for the lions.

Having roasted our marshmallows on the fire after dinner (I had bought a family pack earlier in the day to make up for the privations of the night before), we planned to visit the watering hole late at night, as lions are known to make nocturnal visits on occasion. I’m glad I hauled my sleep-addled self out of the tent at 1am if only for this sight. 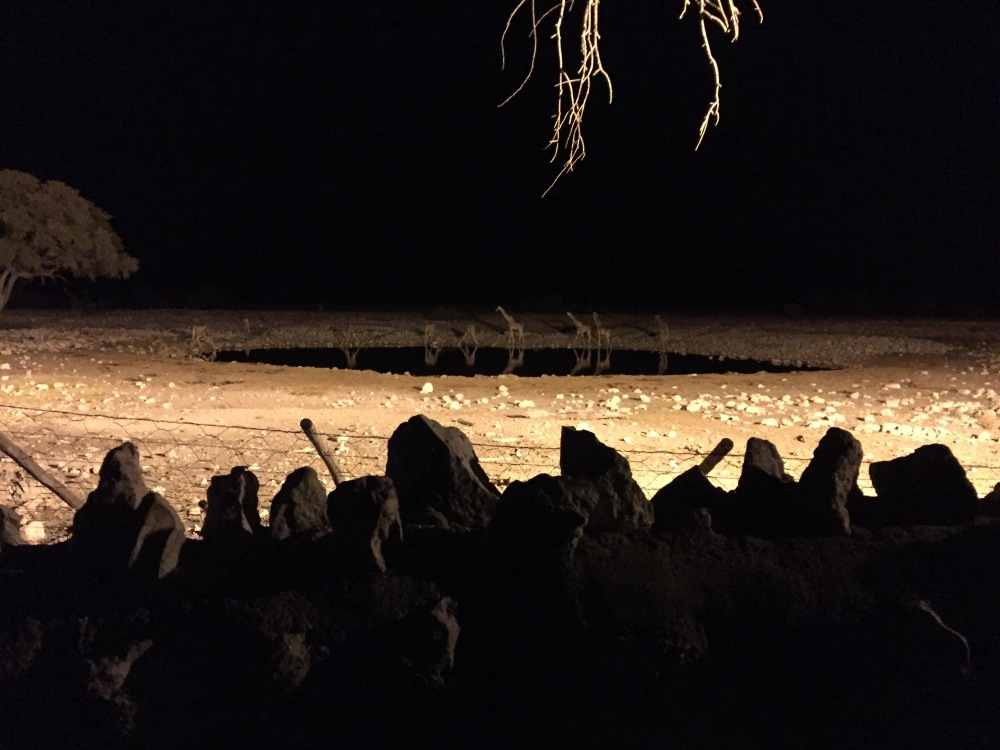 However, still no lions. I had missed out on the “mane” event!