A delicious Lydia-breakfast later (see previous post) and I was clambering aboard a 14-seater safari truck with 13 strangers, to commence a three-day tour of Southern Namibia. Throughout the morning’s drive I worked on familiarising myself with names and back-stories:

Canadians x3: a couple from Vancouver and a guy from Toronto

US x3: a pair of best friends recently embarked on careers in finance and a quinquigenarian librarian from upstate New York

Our tour guides were Elias and Alfius, both sounding like minor characters in a Charlton Heston movie.

As we headed south, the yellowish hills that surrounded the Savannah grasslands gave way to terracotta red peaks and, eventually, as if a time-lapse movie had been created to show Geography students the effects of erosion, were replaced by the red-gold dunes of the Namib desert. 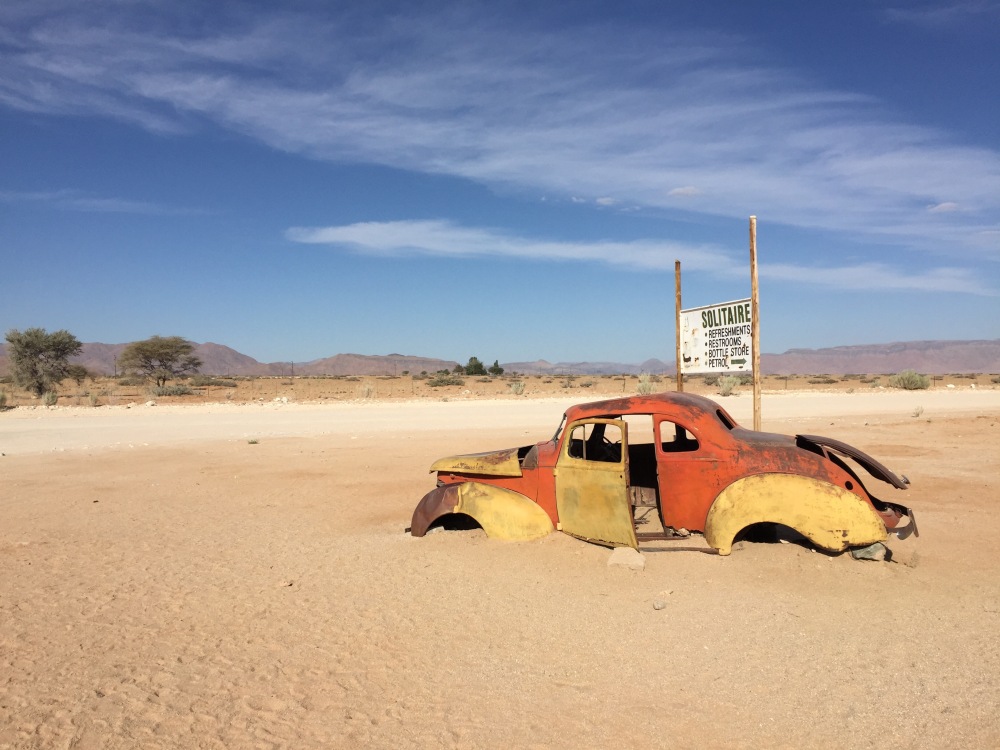 In the late afternoon we arrived at Sestrim campsite, which was to be our base for two nights, then, tents pitched, we headed to scale a dune which is known for its panoramas at sundown.

The Americans and I equipped ourselves with cardboard boxes in the hope of sliding back down the dune after our sunset experience. And so, intrepid dune-sledders that we were, we set off for the summit.

It turns out that this particular dune had been designed by Esher as, every time we reached what we thought to be the summit, another, still higher, peak hove into view.

The views were worth it in the end as, sweaty and panting, we completed the final ascent and, Rocky-style, held our arms aloft in victory.

So, now for the reward of the descent! The guy who had carried the boxes most of the way was given the privilege of the first run. We watched with bated breath as he ran onto the steepest part of the proclivity and jumped into his box……
RRRIPPP! WHOA! FFFLUMP!
The above noises crudely represent the sound of the box staying perfectly stationary, breaking under its pilot’s weight, his expression of consternation as his momentum jettisoned him from the stubborn box, and the sound as he hit the sand, face-first.
When the sun rose the following day, we were lying in wait to ambush it on the top of Dune 45, a dune, confusingly, 46km from our campsite. We sat, panting from the climb, in the peak of the dune and watched as the sun gilded the arid landscape, chasing away the chill shadows of the desert night. The matutinal tranquility was disturbed only by the whine of a drone that someone with a greater appreciation for technology than beauty or manners had deployed.

Our reward for the early start was a cooked breakfast, which was also to fuel us on our 6km hike through the desert to “dead vlei”, an eerie landscape where a dried lake with petrified trees lies hidden between the dunes.

The hike started well, with everyone in high spirits, however, halfway up the first proper incline, it was clear that our librarian friend might struggle with the full 6km. A kindly Canadian took her bag and I took her hand to give her more traction in the sand. Progress was made, albeit laboured. Most of the rest of the hike was flat, so, with the occasional exhortation, the distance was covered without to great a difficulty.

Then the final ascent appeared in the distance and our friend seemed too audibly lose hope. At this juncture, wanting her to reach the viewpoint for dead vlei, I offered to give her a piggy-back if she felt she couldn’t make it under her own steam. It’s as I lifted her onto my back at the bottom of the slope and she told me she topped the scales at 200lbs that I began to wonder whether I had over-committed.

We made it, the red of my face matching the red of the sand, and the view was its own reward. 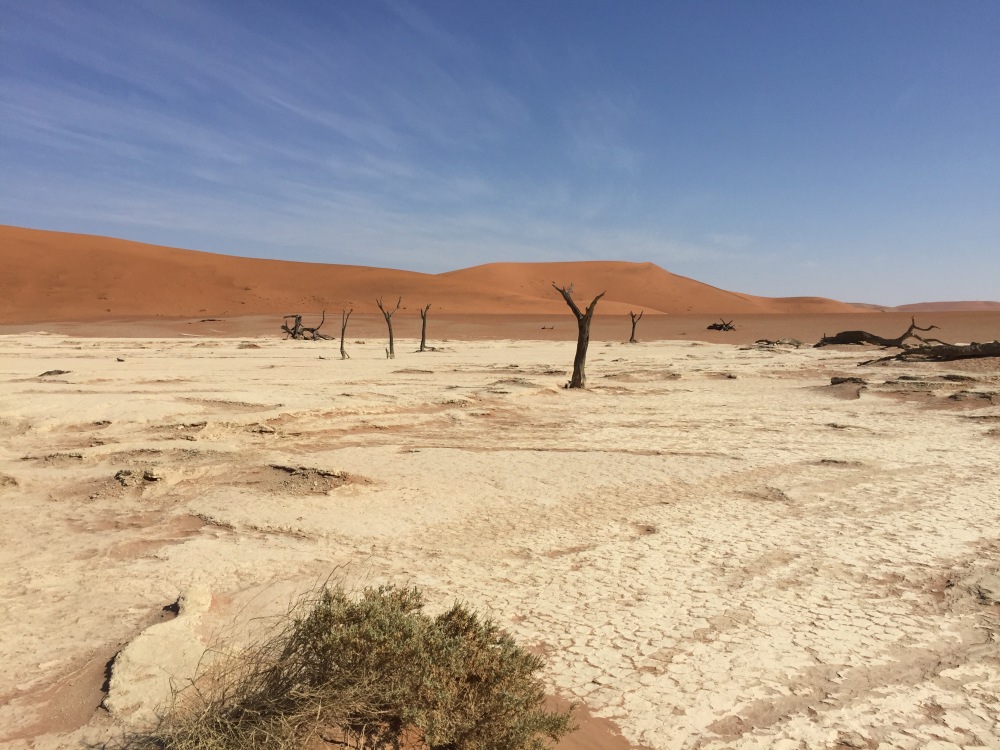 After a well-earned siesta, the afternoon’s activity was to visit the Sestrim canyon. Whilst not quite on Nevada scale, this canyon did give a good glimpse into the history of the topographical development of the area.

Geology rocks!
And it looked quite cool.

To celebrate the achievements of the day, we gave thanks to Bacchus (that’s a euphemism for getting drunk) and decided that a combination of “guess the year” of MTV videos and no-hand Jägermeister shots would make us feel good in the morning.

We were wrong. But at least we could sleep it off on the bus, as our only goal that day was to return to Windhoek.

Mission accomplished and having slept away the Jäger mists, I dropped my bag at the excellent Rivendell hostel (I was staying in an annex called Bag End) and headed out for dinner with the US guys from the trip. I ate a trio of meats: kudu, oryx and eland – species of antelope of varying size (and probably in the “Hollywood children’s names” book)

Warehouse Theatre had been recommended to us be several people as a good location after dinner, so we headed there. Our route took us down a back road where two friendly ladies in short dresses asked us if we wanted to ” Go for funny”. We politely declined and arrived at the bar to find ourselves treated to a magical live performance by a guitar-vocalist duo. Good work, Namibia!