To complete my time in Kerala, I had booked a couple of days at The Jackfruit Tree, an off-the-beaten-path serviced villa nestled in the tea plantations high in the hills in an area called Wayanad.

In order to reach the villa I took a train to Calicut, a large coastal town in northern Kerala (where The Jackfruit Tree also has a stunning beach property, incidentally). From here I took a taxi. As the road climbed into the mountains we felt the heat of the beach fall away, replaced by the cool, fresh breeze of the hill-country. The view from the window grew greener and greener as we entered an upland world of tea-leaves and timelessness.

Photos of The Jackfruit Tree can perhaps describe with reasonable fidelity the view with which I was greeted, but not even my most descriptive attempts could do justice to the overall feeling. Serene? Arcane? Magical? Unspoiled? Uplifting? All of the above and much more.

The owner of the property, Prasad, had been in regular contact and had informed me that he and his family would be arriving late that night and would see me for breakfast. Manoj, the cheerful house manager, met me on arrival and fed me as if I were (very hungry) visiting royalty.

I rose early, flung wide the curtains and grinned like a little child as wave upon wave of gold-tinged green swept in through the open window.

Downstairs Manoj had been practising his food-alchemy again. As I tucked into the food-gold, Prasad and family appeared.

Prasad was a former advertising professional turned entrepreneur (I didn’t ask whether, now out of the ad business, he should be called “Pras” instead). His wife, Anjana, was a renowned reporter with an online following that would make a Kardashian envious. Their son Anan, a very bright, young 10 year-old recovering from being ill, had also joined them.


Sometimes in life you meet people with whom you immediately click. We immediately clicked. Within minutes we were firm friends and I was receiving lessons on how to play Carrom, a snooker-like game where “balls” resembling draughts and shot into pockets using your fingers.

So much did we warm to each other that, by lunchtime, I was sitting in the family car on my way to a restaurant with them. It was scrumptious! Although the presentation was similar to my banana-leaf meal in Kochi, the flavours and textures were totally discrete.

I had noted the proximity of the villa to Mount Chembra, the tallest hill in the region, and had expressed an interest in climbing to the peak during my stay, so Prasad helped me to plan my route, with advice to leave early the next day to avoid the heat of the sun.

I will tell the story of my walk to the foot of Mount Chembra in pictures: 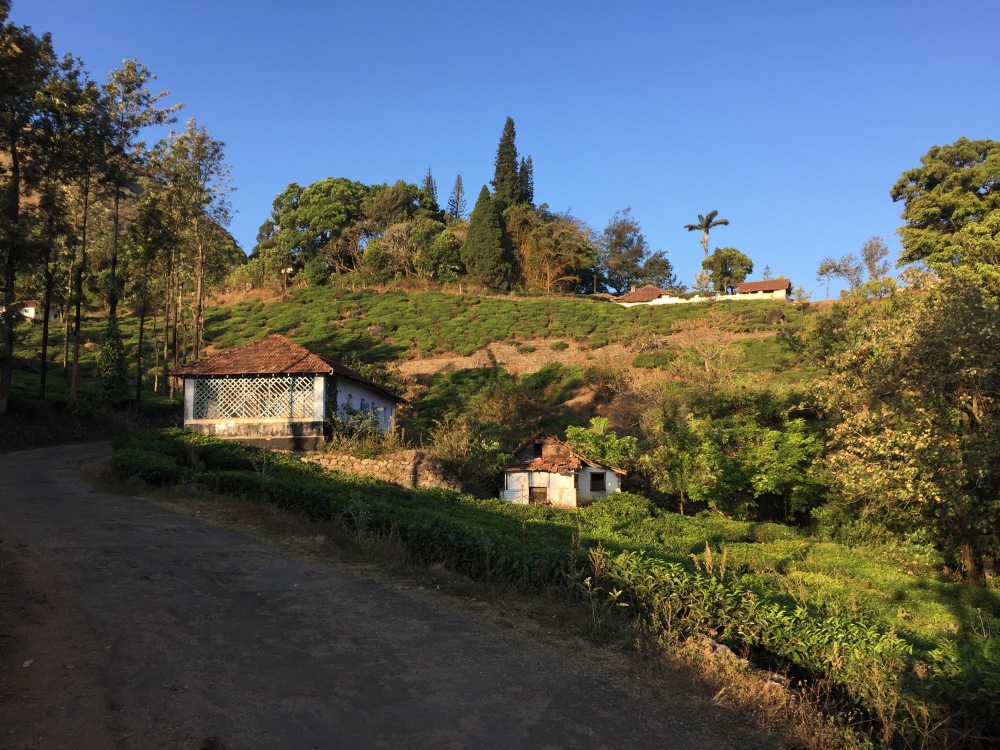 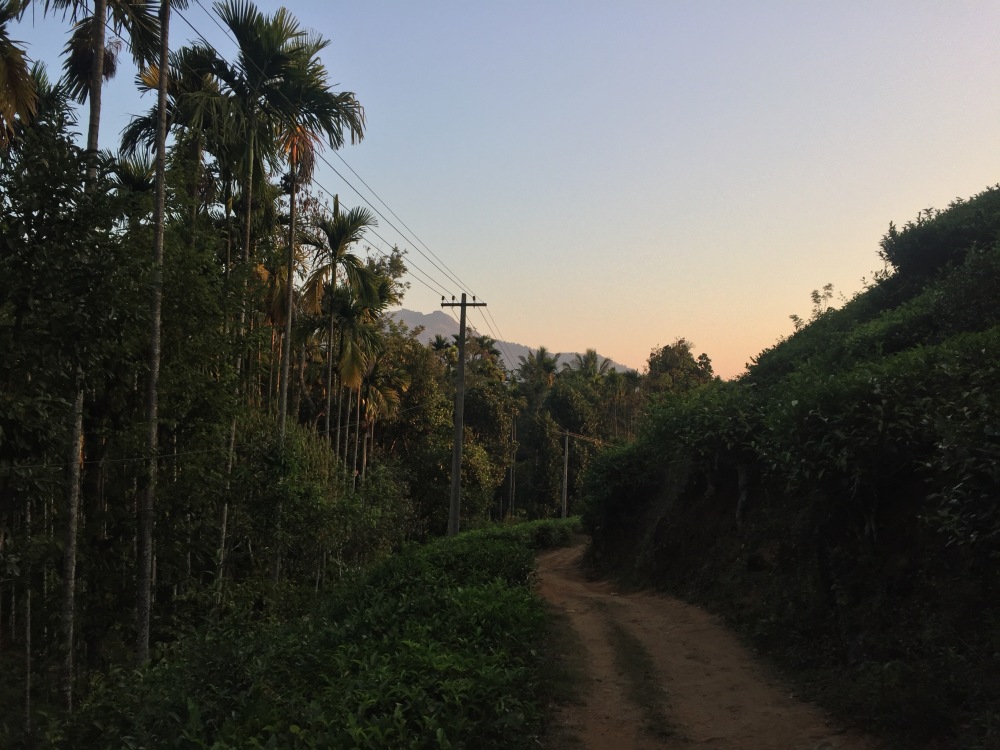 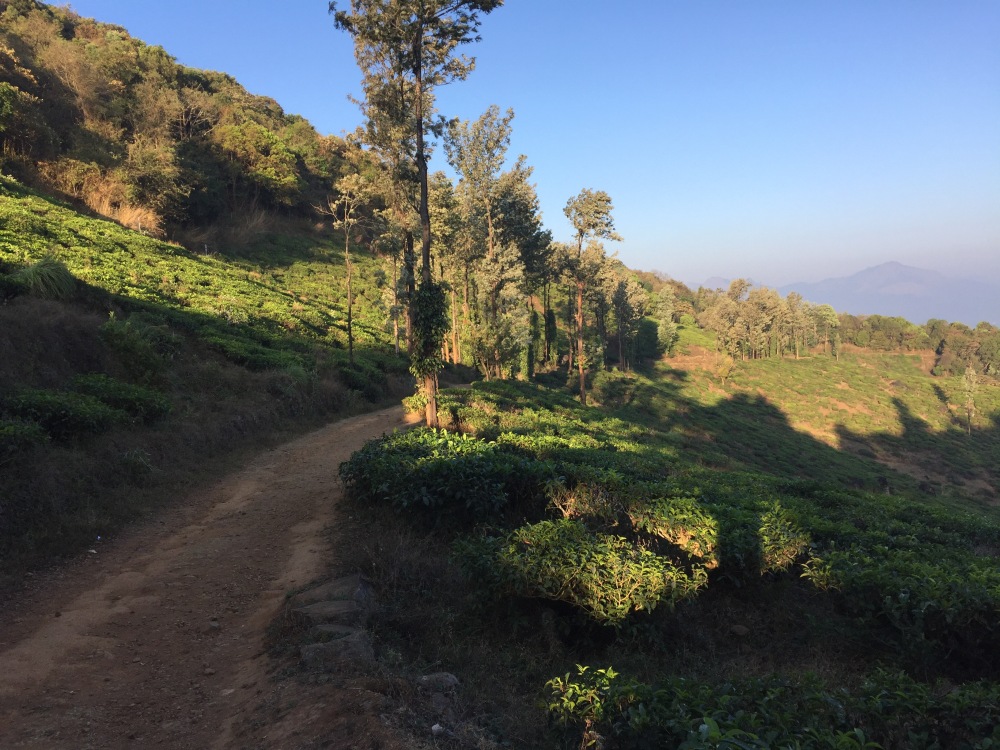 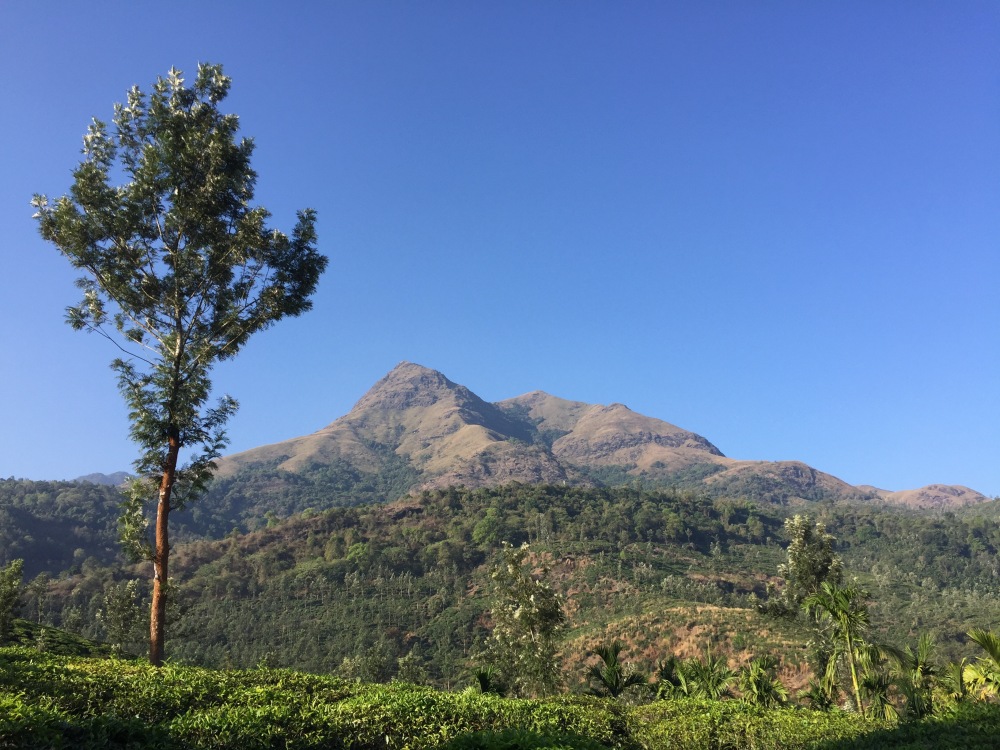 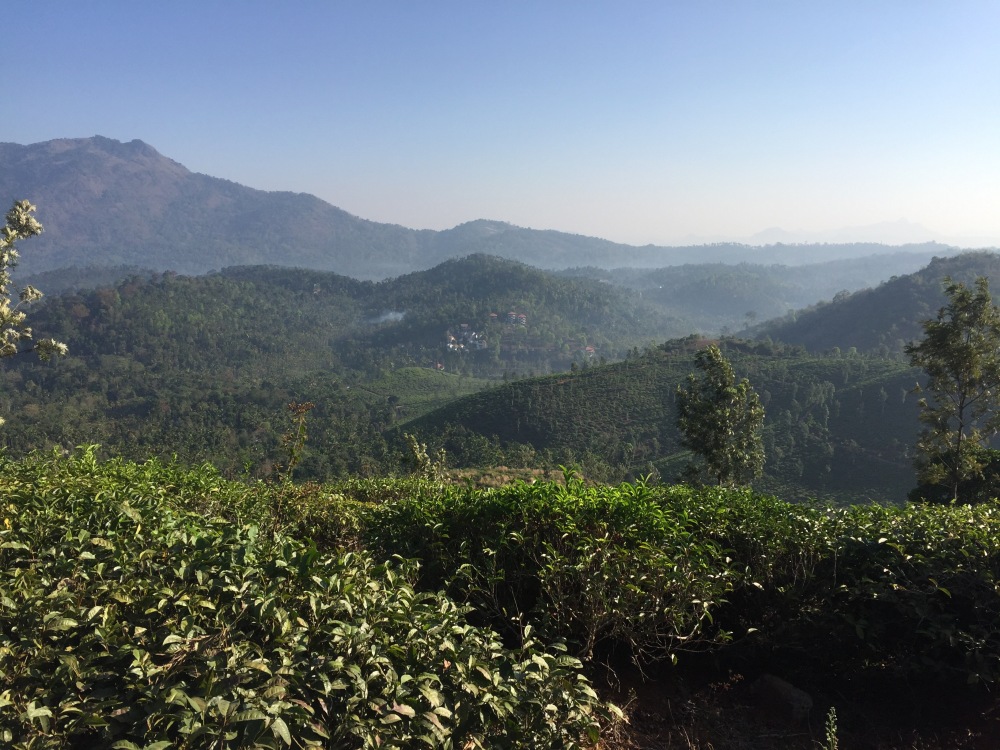 Now, it should be noted that access to the upper slopes of Mount Chembra is not free. I was registered at the checkpoint and given the option of a guided tour for 1500INR ($23) or a solo climb to a slightly lower viewing area for 30INR. Given the guides were all in their sixties and I was running most of the route, I decided for the cheaper, higher-speed option.

Perhaps I missed out on some more spectacular views, however, those I was afforded were far from unimpressive: 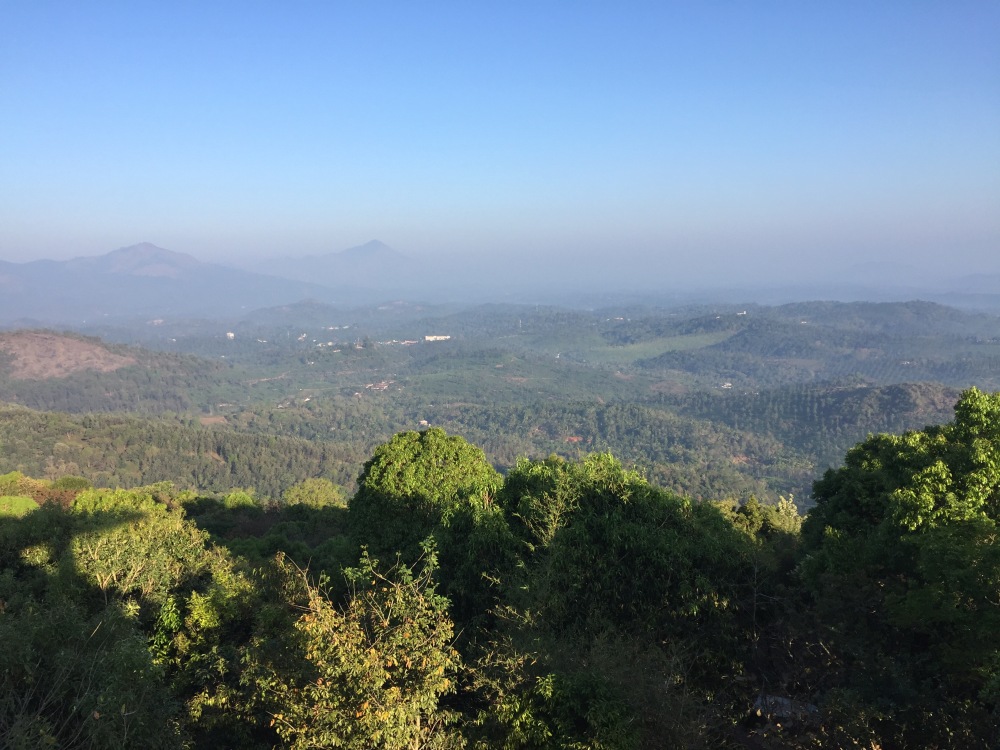 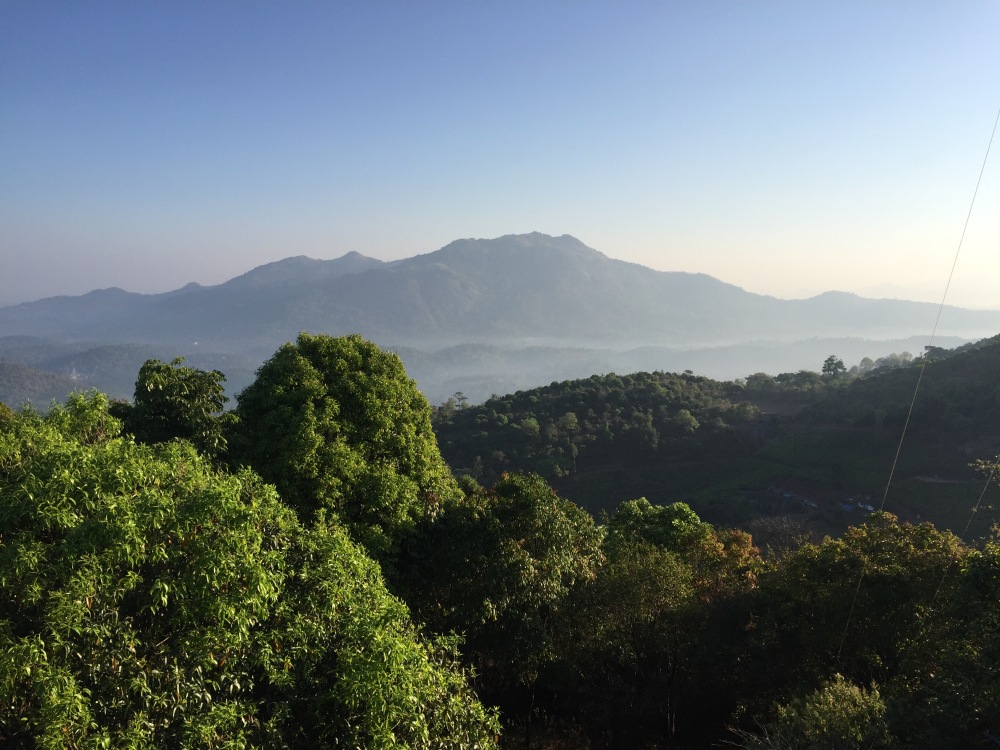 As the mist began to burn off I took advantage of the remaining minutes of temperate heat to run back down and through the tea plantations for a cuppa of my own, neatly accelerating the timeline from production to consumption.


On the subject of tea, Manoj, the house manager, had informed Prasad of a street vendor hugely popular with the locals. One does not ignore a glowing endorsement from a man who cooks as well as Manoj. We piled back into the car once more and went street-food hunting. The stall was so understated we passed it without realising but were set right by locals. It was clearly well-known.

We pulled up opposite a metal frame with a makeshift canvas roof for shelter. The stall was almost entirely hidden by the queue. Good sign.

Other highlights of my time with the Prasad, Anajana and Anan include discovering a coffee farm down a narrow lane, a picturesque lake at sunset and Anjana realising, due to proximity, that I’m quite tall. In the end, I was sad to say farewell – always a sign of time well-spent. I boarded a bus bound for Ooty and the next leg of my adventure.