Setting out from Auckland with a sense of adventure and a dismally underpowered Toyota Yaris, I headed for the first location on my printed itinerary: Waitomo.

Waitomo is renowned for its network of limestone caves and underground rivers. Thinking this sounded like a good holiday spot, a host of glow worms decided to visit. They liked it so much they stayed. As a result, tourist visits to the caves are lit by the natural luminescence of these creatures, who do a passable imitation of the Milky Way on the roof and walls of the caves.

Where tourism leads, in NZ, adrenaline tourism follows. Research on Waitomo had led me to The Legendary Black Water Rafting Co, which had devised a series of canyoning, climbing and rafting experiences in the labyrinthine caves. I was booked in for rubber ring rafting (say that five times quickly!) the following morning so I checked into the quaint and somewhat Fawlty Towers-esque (in outward appearance only – the service and rooms were fine) Waitomo Caves Hotel.

9:15am the next day and I’m clambering into a wetsuit and rubber boots in the company of a Texan guide and four German participants (in the suits and with their accents I couldn’t help but be reminded of the nihilists in “The Big Lebowski” but I refrained from comment.


We were given some brief training and then head torches were switched on and we commenced our subterranean voyage. As we were in water, all footage was taken by the guide and I was too stingy to buy a copy but put “Waitomo glow worm caves” into Google images and you’ll get a diluted sense of the beautiful views.

We squeezed through tight crevices, jumped backwards off small waterfalls into our rubber rings then finally drifted silently, looking upwards, entranced by the astral chart of thousands of tiny points of light. We emerged into the daylight smiling and with a lingering reverence for the beauty of nature.

Next up, via a round of golf en route, was the Tongariro Crossing – a section of one of what NZ terms the “Great Walks “. At the highest point of the crossing one is flanked by Mount Ruapehu, Mount Tongariro and Mount Ngauruhoe (Mount Doom in the Lord of the Rings trilogy)

The walk begins in the Rocky valley below and follows a gruelling climb to a high saddle where one is rewarded with panoramic views of volcanic crags and lake filled craters, some giving off steam and the unmistakable, nostril-assaulting stench of sulphur. Having gained this vantage point, and with a distinct aversion to walking down steep slopes due to the knee impact, I decided to run the downhill portion of the crossing, meaning I was done before lunchtime and had well and truly messed with the itinerary, which had not factored my surrender to gravity on the latter half of the hike.

NB- if doing the hike, I recommend driving to the car park at the finish early in the morning and taking a taxi or shuttle bus to the start so that you are not left waiting, tired and sweaty, at the end if the trail if you complete the hike ahead of schedule.

Free afternoon in hand, I decided that more hills were in order, however, this time I would have a little more help, in the form of a 5-speed ATV/quad bike. 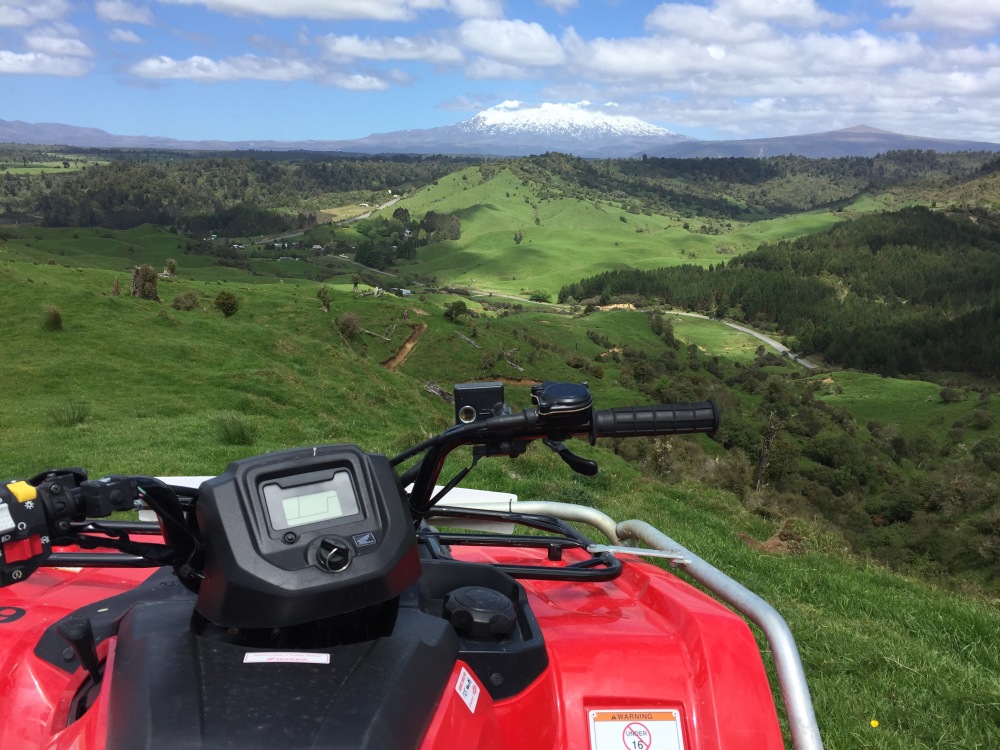 Napier was the next port (literally) of call. Instead of following the state highway, I took a recently tarmacked road known as “Gentle Annie” which is a driver’s dream and affords some stunning views.

Sadly, I was only able to enjoy the second half of the journey as, during the first half I was listening to the conspiracy theories and psychobabble of a hitchhiker claiming to work for both Mossad and the CIA. Little did I know the next hitchhiker would make this guy seem well-balanced.

The city of Napier was leveled in 1931 by an earthquake measuring 7.8 on the Richter scale and was subsequently rebuilt almost entirely in the art-deco style. The reason I have no pics of this is that my arrival in Napier coincided with that of a 3000-person cruise ship so, not wishing to join the blue rinse brigade on the high street, I hired a bicycle and headed, via a wetland nature reserve, to the wineries in Hawke’s Bay.

As arguably the oldest winery in NZ, Mission Estate Winery seemed as good a place as any to cease pedalling and, because my life is so stressful, (ducks as friends throw things at him) I treated myself to a glass of Shiraz and a cheese platter. Ahhhhhh, bliss!

Cape Kidnappers, a few miles south of Napier, is home to a colony of gannets – rather pretty seabirds who have the astonishing ability to fold away their wings and plunge up to 10m into the sea from a great height to catch fish. They also have a romantic way of greeting their partner which I can only describe as part necking, part “beaking” (©20th December, MMXVI)

FYI there are two tour providers, the cheaper option visits the beach colony via  a tractor and trailer ride along the beach at low tide. The more expensive version is not tide dependent and uses a 4WD bus to reach the colony on the cliff. Both get  very good write-ups.

Bidding farewell to my feathered friends, I once more took to the road, destination: Taupo. A pretty town on the banks of a prettier lake. Not much to report here except I have a video of me parasailing over the lake to take in the view. Sadly, it’s on a camera memory chip and I currently have no way of downloading it. I will update this post anon but for now a pic of the couple who went before me: