I’m running about a week behind due to sheer laziness and an overly comfortable hotel bed. As such, I may forget a few of the details but, to balance this, I may well invent a few too – cosmic equilibrium maintained.

I arrived in Lima around 6pm and made my way to the Miraflores district: an upmarket area close to the surfing beaches which has become a safe haven for tourists visiting the city. (The historic city centre, whilst beautiful during the day, is not a place widely recommended for nocturnal tourism.)

I had spotted a room on AirBnB advertising the potential for Vegemite sandwiches at breakfast and, whilst it would never quite stack up against Marmite, it was still appealing. So here I was, finger on buzzer to Corin and Sally’s apartment. The information I had in advance was that Corin was a Kiwi who was into surfing and that Sally, his girlfriend, was Peruvian with a keen interest in all things culinary.

Corin had a language class on the evening of my arrival so Sally showed me the room then very kindly offered to show me a favourite local restaurant, La Lucha, for a bite to eat. I later discovered that both she and Corin both recommend this place with the same frequency that most people blink, so I have my suspicions that they’re getting a cut of the takings!

The following morning I met Corin and discovered that Sally was not the only one with culinary skill.

In addition to my delicious, nutritious breakfast, Corin also served up a portion of “Never judge a book by its cover”. Whilst he may conform outwardly to the surfer stereotype – beanie, hoodie, propensity to talk with almost religious awe about particular waves – I quickly realised he was distinctly atypical in many ways. Not only does he hold a PhD in synthetic chemistry, he is also the founder of a rapidly developing business, Seleno Health, with some satisfyingly science-based products rather than the usual “Rock-with-special-aura-will-give-you-eternal-beauty” nonsense.

I learned that he and Sally were planning on attending a World Cup qualifying match between Peru and Ecuador that evening in the Estadio Nacional with some of Sally’s family. Was I keen? As mustard!!

Peru had lost their previous match and this was very much a must-win encounter. We arrived at the stadium about half an hour before kick-off, almost the amount of time it took to get patted down by security at the entrance. Once he had patted everywhere else anatomically possible, the guard, determined to leave no stone unturned, grasped me firmly by the genitals. Ostensibly he was checking for weapons, but I can’t be certain he wasn’t just copping a feel.

When we finally reached our seats in the West stand there was already a hardcore contingent of Peruvian fans behind the goal in the North stand, warming up their vocal chords and stretching calf muscles ahead of 90mins on jumping up and down.

Uncle Juan, Auntie Raquel and Cousin Kelly arrived shortly after us and gifted Corin a Peru shirt which he immediately donned. More about Uncle Juan et al later in the post.

A series of noises from the announcer followed by roars from the home fans indicated the introduction, and subsequent arrival, of the Peru team.

The whistle blew. Peru had all the early dominance yet squandered some gilt-edged chances. Was this to be a case of what might have been? But no, penalty awarded. Sweet strike. Gooooooooooal!! The sound was deafening and our North stand neighbours went crazy.

Although Ecuador levelled, Peru sealed it in the final 20 mins to keep their qualifying hopes alive. Spectacular!

Entirely through luck rather than judgment, my arrival in Lima had coincided with a week-long, annual food festival called “La Mistura”. Having heard much about Lima’s gastronomy, I was intent on paying a visit so coerced Corin into accompanying me.

The setup was a sprawl of marquees and gazebos with stalls selling every food imaginable. (And some unimaginable foods too.) Much as I would have liked to, eating one of everything would have rapidly produced a Monty Python Mr. Creosote moment, so I decided to be strategic. I started with ceviche and leche de tigre (a sort of milky drink with chunks of raw fish, onion and corn that tastes far better than it sounds) and then moved on to causa, a kind of potato and avocado cake typically with either chicken or salmon filling. I completed this celebration of gluttony with some aji de gallina, a chicken dish with rice and a nutty sauce. I washed down this feast of deliciousness with two different craft beers from the local Lima scene.

I had met a sweet Peruvian girl who had agreed to show me around the historic centre of Lima. We strolled between the two main squares then headed to the church of Santa Catalina for a tour of the cloisters and the famous catacombs. 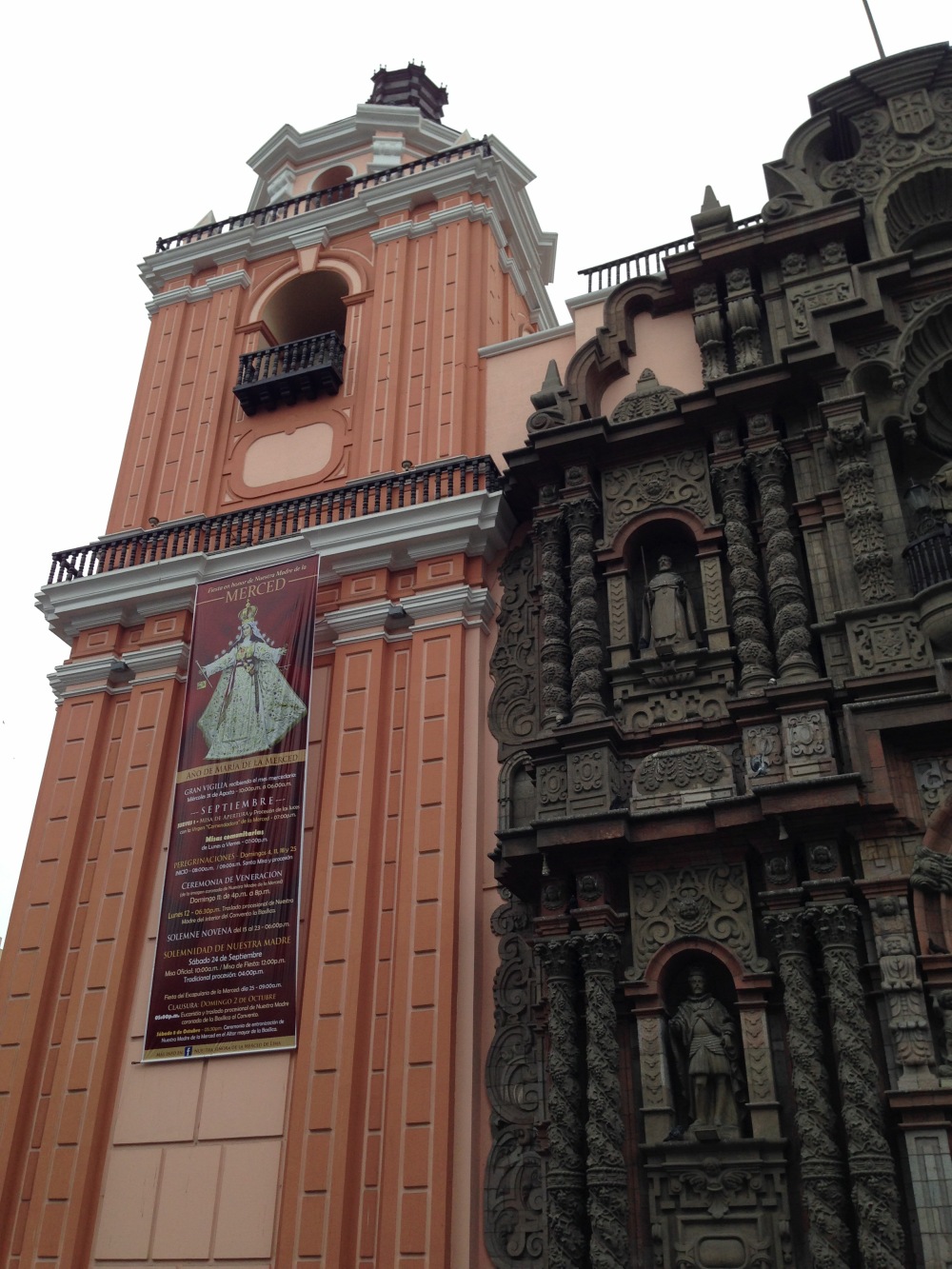 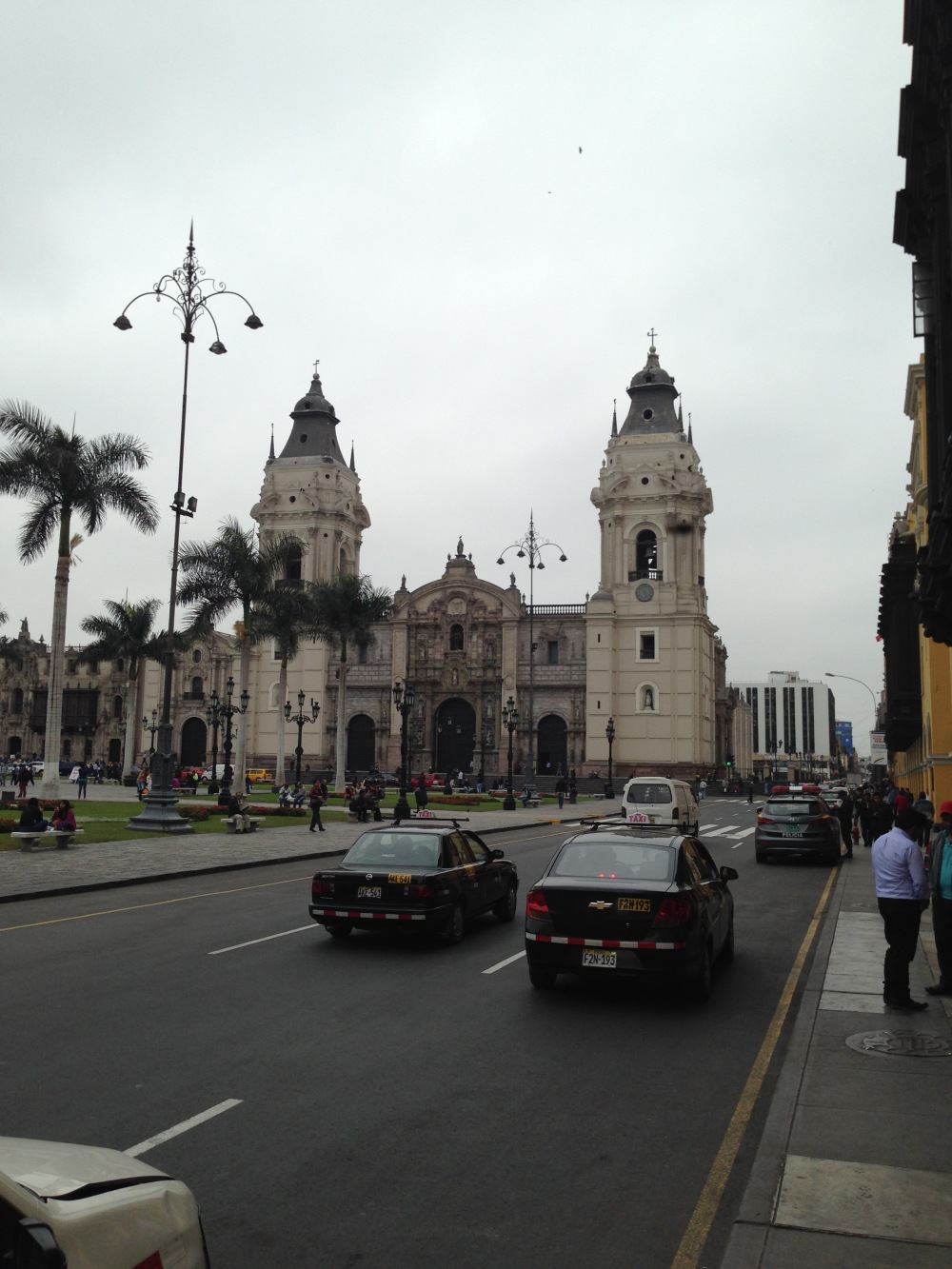 Sadly, no photos were permitted on this tour otherwise I would provide you with some rather macabre images of piles of skulls and assorted femurs, humeri, fibiae etc.

Corin and Sally had promised to take me to a local market for a food tour and made good on their promise the next day. Sally kept popping into fruit stalls and reappearing with fruit I had never seen before, as delicious as it was unfamiliar.

The fruit was followed by a stop at a no-frills ceviche stall where a round and jovial chef was producing what turned out to be truly delicious fare. I’m still not convinced ceviche should be eaten before midday, but it was sumptuous.

The tour was completed by a stop at a herbalist’s stall whose owner had natural cures for everything from scar tissue and back pain to impotence. A hugely fun little excursion.

Much of the rest of my time in the capital was spent chatting to Corin and eating with a few spurts of exercise and one fairly pathetic, but enjoyable, attempt at surfing thrown in for good measure but there is one very notable event that needs recounting before we close the Lima chapter.

Do you remember Uncle Juan? Well, he lives in Callao, a very “local” quarter where tourists often fear to tread and which is home to several areas which even the police tend to avoid. And it turns out that Uncle Juan is kinda a big deal in Callao. On my penultimate day in Lima, Sally and Corin were heading to a street party in Callao in honour of some friends who were leaving shortly for Spain. They extended the invitation to me and I gladly accepted, eager to see an area seldom frequented by foreigners.
When we arrived we found a section of the street closed off and under the shelter of a canvas roof. Here an unfeasibly large band was in the process of setting up for what, I was told, would be an afternoon of Salsa, Meringue and Cumbia.

The walls of the marquee displayed the faces of famous Callao musicians and dancers of yesteryear and, on one wall stood the names of the current heads of the community. Third from top was “Juan”. This was Uncle Juan. It seems we had connections in high places.

We took a seat and were brought some food from the lunch buffet and Uncle Juan headed over to say hi and to give me a large bottle of local beer. Looking around, it became rapidly clear that Corin and I were the only foreigners in the entire gathering. I’m fairly sure we were introduced over the microphone as something of a novelty.

The band began to play at the same time as the beer began to loosen my feet and, once my foot started to tap, dancing was inevitable. I found myself in the vicinity of what one might playfully call the “cougars” and it wasn’t long before I was dancing with a voluptuous lady from among the group sporting a decolleté which, in many countries around the world, would have been classed as a “disturbance of the peace”. I had no idea of the steps of the dance but, what I lacked in technique, I made up for in enthusiasm, hopping and spinning like a Whirling Dervish. By the time the party wound up around 7pm, I was dropping in sweat and had probably made myself the subject of several future anecdotes.


The following day I bid farewell to Corin and Sally after a quick tour of a Mario Testino photography exhibition, and headed to the airport to catch my flight to Medellín, Columbia.
-12.132182 -77.025807