As I write, the dawn is weaving patterns of red and gold through the cloth of cloud on the Patagonian horizon. I am on a bus heading from El Chaltén to El Calafate: places of which I was totally ignorant until a week ago.

Where and what is Patagonia? It constitutes a third of Argentina (ignoring Chilean Patagonia) at roughly a million hectares, and is one of the least densely populated places on Earth with only one person per hectare. It is home to the world’s largest area of continental glaciers (i.e. non-polar) and the world’s southernmost continental city, Ushuaia.

Good, so how did I wind up on the aforementioned bus?

On the recommendation of numerous Argentine nationals, I bought a ticket to El Calafate, a renowned entry point to El Parque Nacional de Los Glaciares (I will not condescend to translate), and headed to the airport. Bad weather along the flightpath meant the plane was grounded so I left the airport again. Hotel, tango lesson, dinner, bed, airport again.

Take 2# was more successful and we were off! A three hour flight on a plane designed for Snow White’s entourage was less than pleasant but, on the plus side, at least I was able to wear my knees as earmuffs.

On arrival I immediately bought my ticket to see El Perito Moreno (the largest of the nearby glaciers) the following day and then caught a shuttle bus into town. Although in Patagonian terms El Calafate is a bustling metropolis, on more recognised scales it is a small town but picturesque nonetheless. It is situated on the shores of Lago Argentino, a beautiful lake filled with glacier melt-water.

I headed to the hostel I had booked through booking.com. What greeted me could have featured on a cable TV show entitled “Horrible Hostels: a survival story” – I had to first dip my hand into the toilet cistern to operate the broken flush, my bedroom door handle fell off, the shower was rudimentary and the manager’s snoring reverberated around the entire building as if he were Smaug with sinusitis. Methinks I would only stay one night.

That evening, after a delicious green lentil and sausage stew and a glass of malbec, I noticed that the local casino was advertising a poker tournament. I wandered in and signed up. Those who took to the tables for the 20-man tournament were an interesting bunch, all seeming to know each other very well. I was sitting a few seats away from a very aggressive player who kept losing all his chips and having to pay to reenter the tournament. He was a burly, bald man with a large and slightly hooked nose whom, to my great amusement, the rest of the table called “Gru”.

I played pretty well for 3 hours then got knocked out when, all-in, my pair of kings lost to AQ with an ace on the River (if this means nothing to you, the main takeaway is that I lost.) then headed back to my hostelus horribilis.

After a swift check for flea bites in the morning, I jumped on the bus taking us to the glacier. The guide who greeted us was fluent in English, French and Spanish and gave us a huge amount of information about the area and the glaciers whilst we were en route. He also resembled the love-child of Thomas Castaignede and Hugh Jackman, which was slightly disconcerting.

There were many adjectives evoked by the first sight of the Perito Moreno glacier – imposing, beautiful, crystalline, stark, brittle – but the most salient and surprising was “blue”. Due to the vagaries of refraction, all but blue light is filtered out by the ice, resulting in a pulchritudinous spectrum of blue from pale pastel to vivid turquoise and beyond.

This particular glacier advances two metres every day, the advancing ice fracturing and crashing into the lake with a sound like thunder whilst it is replaced at the top of the mountain, some 20km away, by fresh ice.

After a walk along various viewpoints on the bluff opposite the glacier, we boarded a boat to take a closer look and examine some of the icebergs that had splintered off. Spotting that I was travelling alone I was adopted by three middle-aged, Brazilian ladies from Rio who were on holiday. They chatted to me animatedly in friendly Portuguese, my inability to understand seemingly mitigated by my amused smile and occasional shrug.


Upon our return to El Calafate, I then hopped on the bus to El Chaltén – self-proclaimed trekking capital of Argentina. The bus company clearly used the same handyman as the hostel, evidenced by the fact that the heating was kaput and the ambient temperature was sub-zero. Stoical smile deployed, I donned my hat and gloves and hunkered down.

First impressions of El Chaltén were that I was Clint Eastwood and, sensing a shootout, the whole town was in hiding. Indeed, it was only some tumbleweed and a saloon door creaking in the wind away from a perfect parody. As I walked through the ghost town I realised that the townsfolk weren’t in hiding. They weren’t there. It turns out that in winter – the low season – the town all but shuts down and runs on a bare-bones infrastructure.

It may sound at this point that I am whingeing excessively and that I did not enjoy my trip, but this is far from the case, as you will see. I’m merely moaning for comic effect. My accommodation here was diametrically opposite to that of the night before: clean, bright, spacious, warm. Stoical smile turns to grin. Aaaahh! And relax!

Armed with a trekking map furnished to me by the matronly proprietor in her flannel dressing gown the night before, I pulled on as many layers as I could find and set off along a 9km trail to Lago Torre, a mountain lake in the lea of a large peak.

After a steep initial ascent, the path plateaued to reveal a sibilant steam in the valley below and snowy peaks rising from the horizon. The path then led me into an enchanted wood, where snow and ice clung to the branches of the gnarled trees like a silver aura, the silence interrupted sporadically by a crested woodpecker living up to its name. 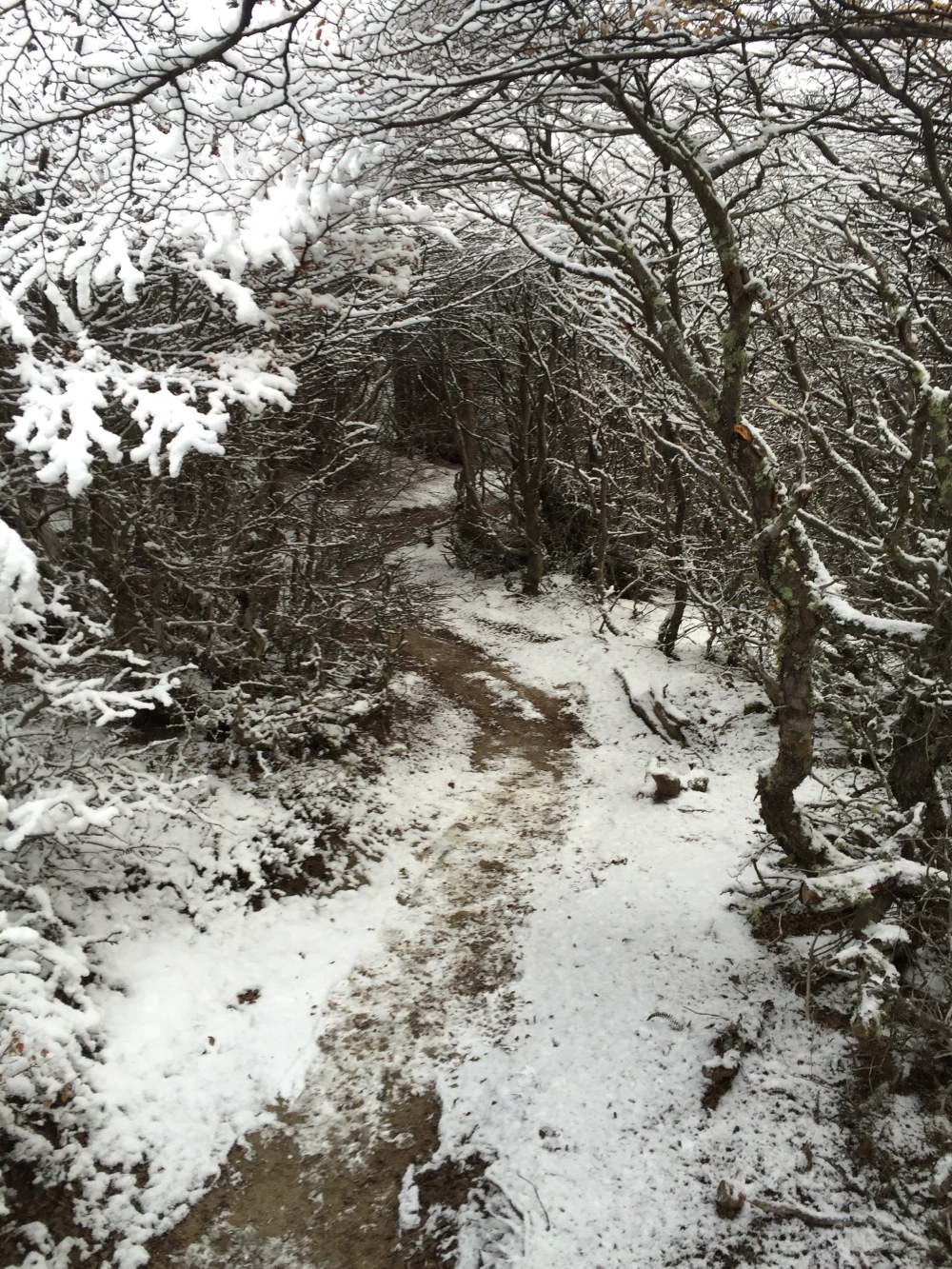 Descent, valley floor, gentle slope and I had arrived at the lake. It was frozen solid except for the far end where it was met by the familiar blue of a glacier, whose continual shedding of ice had, presumably, stopped the ice of the lake from forming below. Behind it rose Cerro Torre, the mountain after which the lake was named, jagged and fierce, piercing the clouds that dared encroach upon its territory.

When I took in the 360 degree panorama, what I noticed most was what I didn’t notice: there was not one house, no telegraph poles, not another living soul in sight. Privy to the remote beauty of this place, I felt somehow complicit in its secrecy.

In an attempt to stay warm, I jogged most of the way back, stopping only for chocolate when I felt my energy waning.

My reward on my return was running myself a monkey bath (bathwater so hot it produces an involuntary “Oo! Oo! Ah! Ah!” as you lower yourself into it). Sadly, at my height, I have to alternate between torso and legs under the water, but it was blissful nevertheless.

My choice of trek the following day was the hardest in the area, bound for La Laguna de Los Tres. A 22km round hike. Off I went through more glorious surroundings. It was only at the final ascent through snow on a steep, narrow, rocky path where a frozen rivulet had created treacherous patches of ice, that I wondered whether hiking boots might have been preferable to everyday trainers…..


Risking life and limb was worth it for the view. I even bumped into a foolhardiness (the correct collective noun in the situation) of Brits at the top of the climb and shared some cookies with them whilst discussing Brexit.

Bath, bed, bus, Boeing and back to Buenos Aires.