Whoa! Get your minds out of the gutter! But, yes, even though I’m a part-time collector of “I ❤️” t-shirts, I couldn’t bring myself to buy the Beijing version for obvious reasons.

But I do love Beijing.

Shanghai is an ostentatious salesman, Beijing is a professor or a stern father, perhaps. Fewer glamorous skyscrapers adorn kilothe Beijing skyline but it’s architecture is no less impressive. Here the buildings are weighty, imposing, vast.

I went to the airport almost immediately upon arrival in the capital to meet my girlfriend who was flying in to join me. Tired after the 24-hour rail journey, food on the first evening was perfunctory and swiftly followed by sleep.

On our first full day of tourist box-ticking, we decided, the weather being fine, to visit the Great Wall of China. The two closest sections to Beijing we suspected might be Great Walls of Tourists, so we selected a location called Mutianyu, some 90-120 mins away. At least, it would have been had a friendly but useless local not advised us to switch buses to avoid traffic. Avoid traffic we did, but only because our new bus went nowhere near the Wall (in fact the closest it got was to a suburban set of Golden Arches!)

McBreakfasted and after a taxi ride back to our intended destination, we had to select a means of transport to the wall itself, running, spine-like along the mountainous ridge above the tourist base below. Cable car? Chairlift? Steps? (Enough steps to make a Stairmaster 2000 blush!)

We had come prepared in sports clothes so chose the latter option and, about 20 mins and several gasps of sweaty regret later, we were atop the Wall. 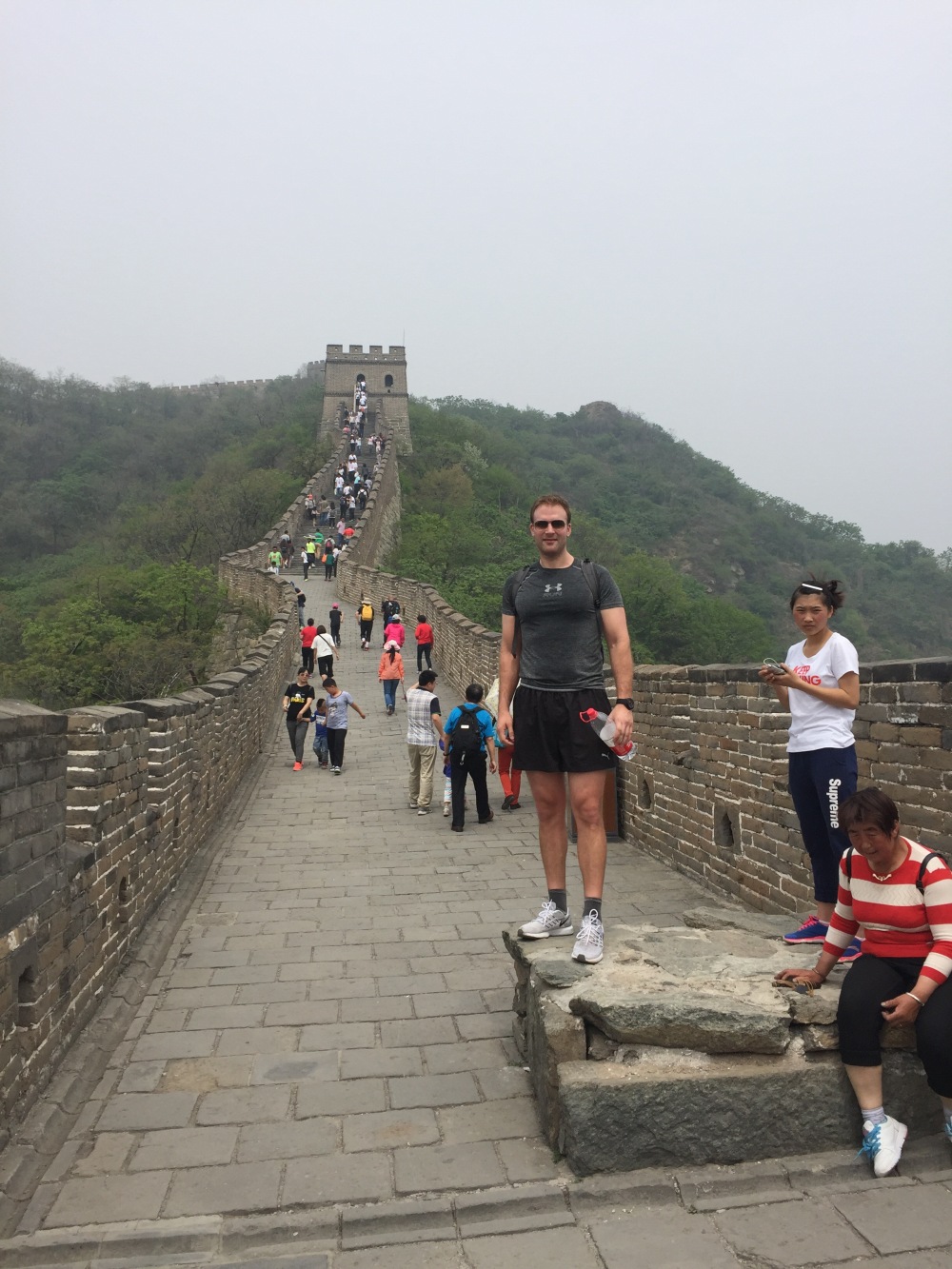 Dodging the crowds of #GreatWallselfie takers, we headed uphill, passing through 6 of the sentry towers, marveling at every step at the sheer magnitude of such an achievement and the implausibility of accomplishing it without modern technology. It truly is a Wonder of the World.

After hiking from tower 18 back downhill-ish to tower 6, we were faced with the descent. There was a metal luge running from the Wall down the hillside to the base below. There was no chance that the little boy in me was going to miss out so the queuing began. It turns out that the speed of descent is limited by the speed of those ahead and so, as a result of the cowardice of my unknown nemesis in pink shirt and chinos ahead, my potentially adrenaline-filled hurtle to the bottom became a glacial crawl, punctuated only by muttered expletives.

One word is synonymous with Beijing cuisine: Duck! So, when back in the city, we prepared to visit Dadong roast duck restaurant, arguably the most famous of its type in town, and certainly the most in vogue after a recent visit from the family Obama.

After a lengthy wait (we had no reservation, sadly) we were seated. I’m not a food blogger so won’t go into minute detail, but suffice to say the only bit of the duck we didn’t rave about was the bill!

The next day brought rain, the really wet kind. It set in early and continued maliciously for the whole day. Not to be deterred, we armed ourselves with umbrellas and set off for Tiananmen Square and the Forbidden City at the heart of the capital. A tourist marches on his stomach and so we needed fuel for the day. We located a nearby hutong (narrow commercial alleyway) and entered the most authentic-looking eatery. We were rewarded with a delicious beef pancake and some excellent noodles, ordered for us by the restaurateur yelling up the stairs at the chef. We chuckled when, after serving us our noodles, we saw our waiter head off to boil himself some instant noodles!

Fed and watered, we headed to Tiananmen. Despite the painful history of the place, there was no denying the pomp and majesty of Tiananmen Square, festooned with red flags and watched over to the North by a vast portrait of Mao Zedong himself. 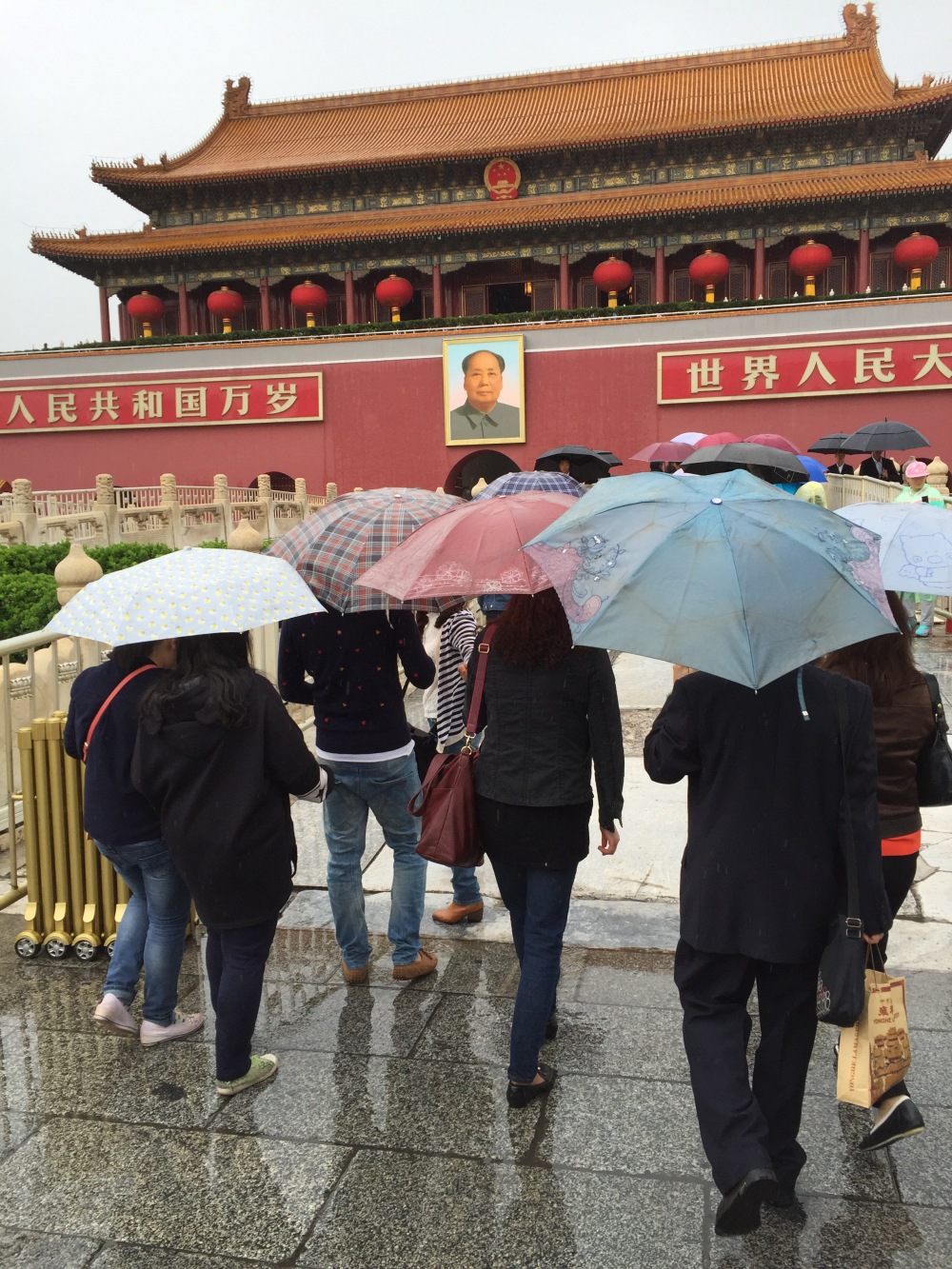 The Forbidden City was a beautiful history lesson in the wealth and power of the ruling Chinese dynasties in imperial times. Every roof more ornate than the last, a garden that would have Alan Titchmarsh in raptures and beauty on all sides. The irony that boat shoes were in no way waterproof notwithstanding, the experience was almost mystical.

With our appetite for culture not quite as saturated as our socks, we headed South to the Temple of Heaven – one of the most famous temples from imperial times.

After completing our quota of highbrow activity, we happened upon a game of bat and ball in the gardens and, noticing me watching, one off the participants handed me his bat and I proceeded to be outclassed by his opponent. For your viewing pleasure…

Exhausted and rather cold, we ate a modest dinner of dumplings and hit the hay ahead of our train journey to Mongolia the following morning.